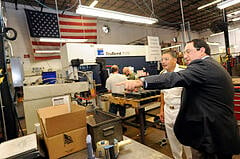 Cruz, reserve deputy director of maritime operations for U.S. Fleet Forces Command, toured the factory with Marlin Steel President Drew Greenblatt. The visit, coordinated by the Chief of Naval Operations and Chief of Navy Information, is part of an outreach mission called “50/50” -- 50 admirals for 50 states -- to promote the Navy’s mission and relevance to national security and international trade. Cruz noted the importance of the Port of Baltimore to Maryland’s economy. Marlin ships material handling containers to 36 countries for clients in industries as varied as defense, telecommunications, health care and aerospace, among others.

“We count on the U.S. Navy to make our trade routes safe so we can hire more machinists and engineers to export to our clients throughout the world,” Greenblatt said.

During his tour, the rear admiral met three veterans who make up part of the 30-person staff at Marlin. He displayed a good sense a humor when it was revealed Marlin's vets are all Army. He said he was pleased to learn of the company’s support for hiring veterans and noted the prominent display of the American flag around the factory. Greenblatt described the company’s technology and its safety record of 1,730 consecutive days without a lost-time accident.

Cruz met with other government, business and civic leaders and media in Baltimore during the past several days. Maryland is home to various naval facilities, including the U.S. Naval Academy, Naval Air Station Patuxent River and U.S. Cyber Command at Fort Meade.