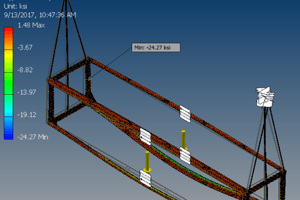 One of the biggest challenges in making any large custom metal form is dealing with how stress factors can become exponentially greater over time. A load that wouldn’t impact a 6” x 6” steel wire frame could cause a 10’ x 10’ one with wires of similar thickness to start sagging.

The issue of how weight is distributed is a constant concern for manufacturers and users of any custom wire basket or sheet metal form design. However, this isn’t an insurmountable issue by any means—especially with the advantage of stress analysis software.

Recently, Marlin Steel was contracted to build a large hoist basket that would hold random assortments of other, smaller baskets and wire racks. This basket would be 10’ long by 2’ wide, and 2’ tall—for a total of 40 cubic feet of space. The basket would be lifted using a hoist assembly with a hook for use with a heavy conveyor system.

The major issue with this design is that it would be expected to hold loads with different weight distributions. One basket load might have several small trays of parts, another one just wire racks holding extra-large parts, the next a densely-packed basket might be on one end of the load while smaller, lighter parts are on the other end.

This posed a big challenge for Marlin’s mechanical engineering team. In many cases, hard points with extra reinforcements would be added to specific spots to account for the way weight would be distributed in the basket. With this design, however, there was no way to be certain of the load’s weight distribution.

So, the thickness of the wires, the materials used, and the placement of support bars/wires had to be robust enough to handle the majority of the client’s specified maximum load weight at any point of the 10’ long basket. However, the basket also needed to be as lightweight as possible so as to not place unnecessary strain on the conveyor system.

Solving a Big Problem with a Little Software

To find the best way to make the basket able to take any load that the client could throw at it, without needlessly over-engineering the design, Marlin’s design team used a Finite Element Analysis (FEA) to check every last inch of the design.

The FEA would allow Marlin’s engineers to rapidly test the basket in a virtual physics simulation, uncovering any and all deficiencies in the design. The simulator could replicate the effects of nearly any conceivable load configuration with only a few adjustments. Since the goal was to avoid over-engineering the basket, even designs that “passed” the rigorous test would be given reworks to see if the basket could work with thinner wires or fewer support braces.

After a few revisions, Marlin’s engineering team found the ideal way to redesign the basket to prevent it from failing, while also using as little material as possible.

The end result was a custom basket that wasn’t too heavy or too weak—it was just right.