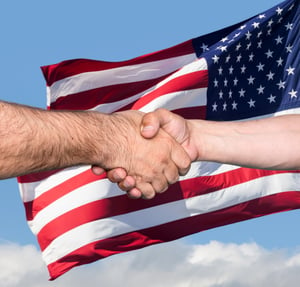 The Association of Manufacturing Excellence (AME) Champions Club is a group that is dedicated to providing “members with state-of-the-art management techniques and skill development opportunities that will help them help their companies compete more effectively in a[n] ever increasingly globally competitive marketplace.” The group, which caters to senior executives from both large and small companies, encourages members to look at the strategic viewpoints on long-term issues that they currently face or expect to face.

Recently, the AME Champions Club visited the city of Baltimore for a quick tour of the Marlin Steel factory and a presentation on reshoring American Manufacturing by Marlin CEO Drew Greenblatt.

Highlights from the Presentation:

Most of the presentation was centered on the issue of reshoring American manufacturing capacity. Many manufacturing jobs get outsourced to foreign countries because of the perception that labor is much cheaper overseas than it is in the USA. However, the data just doesn’t support this argument anymore.

While individual worker salaries might be less per hour overseas —that isn’t the only consideration in manufacturing. One also has to consider laborer output per hour.

For example, one Oxford Economics study cited by CNN states that “China’s labor costs are only 4% cheaper than those in the U.S. when productivity is factored in… because wages in China have risen much faster than increases in productivity.”

Combined with other hidden costs of overseas manufacturing, like months-long shipping delays, red tape, currency fluctuations, parts rejections, and risks to intellectual property, and the case for offshoring production gets even weaker.

Marlin’s Transition from Bagels to Boeing

Shortly after Marlin Steel was acquired by Drew Greenblatt, the company was faced with a crisis. The bagel industry that the company once primarily relied on for customers was imploding, and foreign competitors were flooding the market with cheap commodity bagel baskets that cost less than the steel needed to make them.

Almost overnight, Marlin lost the majority of their commodity bagel basket clients—leaving the company hemorrhaging money. If the problem couldn’t be solved, Marlin would have to close its doors and declare bankruptcy. Instead, however, Marlin adapted.

It started with a call from an engineer at Boeing. The aerospace company needed a custom steel wire basket that could meet incredibly strict parts tolerances, and soon. This was the kind of high-performance basket that couldn’t be replaced with a cheaply-made knockoff. It took a lot of effort for the Marlin team to quickly create something that met Boeing’s strict requirements—and it also exposed Marlin to a whole new market and way of doing things.

From then on, Marlin invested in training employees and factory automation to create precision-engineered metal forms for high-end clients with exacting requirements. This was a market that rewarded quality, consistency, and innovation. Marlin Steel was never the same after that.

In fact, the manufacturing machines Marlin used as part of its transformation from a bagel basket maker to manufacturer of precision baskets for engineering applications was a major highlight of the tour after the presentation.

See how Marlin Steel went from Bagels to Boeing.

Manufacturing 4.0—Preparing for the Future

Marlin Steel's transformation from bagels to Boeing is just one example of how to keep manufacturers healthy and productive in a globalized marketplace.

The use of factory automation allows each individual worker to complete many more product assembly tasks than they could using manual assembly methods. Also, each product is more consistent, leading to fewer parts rejections on the assembly line.

Machines like the TRUMPF laser can cut steel that's 0.625" thick at a speed of 1 foot per second while achieving a tolerance of ±0.004" on every piece of metal it cuts. Even better, the machine keeps human workers safe by handling the dangerous task of cutting steel while letting the human operator stay well away from the cutting laser.

Basically, more parts get made per hour, there are fewer quality issues, and production doesn't get brought to a halt because of a factory floor injury.

Yet, there's more to manufacturing than just having the right robots. Marlin Steel and other Manufacturing 4.0 companies also invested a lot into training their teams. The skills matrix used by Marlin helps everyone see which skills are most needed. Meanwhile the learning of new skills is incentivized through pay increases—the more important and in demand the skill is, the bigger the pay raise is for learning it.

Marlin sets aside 5% of its payroll budget just for training employees so they can go to the schools they need to or get the online courses necessary to earn those skills. The payoff for this is that it helped Marlin not only close the skills gap, but create skills redundancy.

Meeting with the President of the United States

One subject that the AME championship club attendees were particularly interested in was the meeting that Marlin’s CEO had with President Donald Trump.

In this meeting, Drew Greenblatt had the chance to sit down with the President of the United States and discuss strategies for growing American manufacturing by streamlining regulations, improving the education system, and addressing trade agreements so that U.S. companies could have a level playing field with their foreign competitors.

Being able to meet with the President and talk shop about what American manufacturers need was a huge opportunity, and such collaboration is the key to creating positive change for the manufacturers who fuel job growth.

After the presentation, the members of the AME Champions Club were given a quick tour of the Marlin Steel factory to see the Marlin team in action.

Everyone here at Marlin Steel would like to thank the Association of Manufacturing Excellence for taking the time to stop by the factory. Organizations like the AME Champions Club help raise awareness about key manufacturing issues—helping us all build a better world.