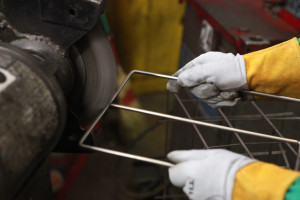 For many of our customers, a generic basket designed to be useful for a broad number of parts is not enough to meet their needs. From time to time, a basket needs to be designed to exacting specifications that are perfect to hold a particular part through a process or a series of processes.

In a recent order for a parts washing basket, the customer had a request for a custom parts handling basket that could hold not one specific part, but three different parts. However, this basket could not be a universal design, it had to hold each of these three parts securely through the process.By keeping these three parts in the same basket throughout their finishing process, the customer was able to streamline final assembly once the parts were finished. Each part would be subjected to the same environments and uses once fully assembled, so they needed to go through the same processes.

Another request for this particular order was that the baskets should be able to stack in order to save space, while the parts are inside.

Creating the Right Basket for the Job

For this particular customer’s finishing process, the parts needed to be held in place securely, but with each part being of a different size and shape from the others, a generic divided basket would not be right for the job. Also, the parts still needed to be easy to access while in the basket for fast removal at the assembly phase of the process.

To ensure easy access, the designer in charge of the project decided to use a wire frame design to give the most open design possible. This way, the parts would be easy to reach while in the basket.

The wire frame was custom shaped to accommodate the different parts with a snug fit. This allowed to parts to remain securely in place throughout the parts finishing process, without the need for a lid.

For this customer’s particular wash process, a simple grade 304 stainless steel allow was deemed appropriate to resist corrosion and provide a long useful life, all while remaining budget-friendly. The wires for the frame of the basket were primarily .25” thick, which was more than enough to support the weight of not only the contents of a fully-loaded basket, but of several other fully-loaded baskets mounted on top of the basket.

Two thick wires were added to the ends of the basket to help facilitate manual handling, as well as to act as a guide for stacking the baskets on top of each other. On the bottom of the basket, the wires reinforcing the base were laid out in a diamond shape. The diamond shape on the base helps to keep the basket from getting stuck on conveyor belts and rollers for those phases of the process where the basket is being moved on automated equipment. Before the basket design could be finalized and put into production, the basket first had to be tested. For this purpose, many manufacturers create a prototype unit and send the prototype to the client to test in their process. This process of creating a physical prototype is time-consuming and wasteful for several reasons:

Rather than rely on the time-consuming process of making a physical prototype, Marlin Steel’s engineers test their designs using AutoDESK computer software simulations. This program can test the baskets virtually, making sure that the materials of the basket and its design are able to take the stresses of the processes the basket will be subjected to over thousands and thousands of uses. If the basket’s frame deforms by as little as the width of a human hair, the design fails and the engineer gets a report of why the deviation occurred so that he or she can correct it.

This process of using virtual simulations before manufacturing a real-world prototype saves an enormous amount of time and resources on making basket designs that would never work for a given client’s particular application. These simulations can be run to check the failure rate of baskets over the course of thousands of uses in moments, rather than the weeks or months it would take to stress test a physical prototype for a similar number of uses.

Find out more about how Marlin Steel’s engineers can help you make a better custom metal basket for parts handling today!