Compared to plain carbon steel, stainless steels – there are more than 300 grades -- contain at least 12 percent chromium. When the chromium combines with oxygen in the atmosphere, a thin, invisible layer called the passive film forms on the surface of the steel. The protective layer is so thin – a few atoms thick -- that the metallic, grayish coloration of the underlying steel is visible. If it gets scratched, the oxides quickly form again to repair the invisible layer.

On plain carbon steel, by contrast, the layer that forms in ambient environments is a different oxide that is orange, thick, loose and porous -- better known as rust. Also, stainless steel isn’t technically stainless; rather, it “stains less.” The passive film needs oxygen to repair itself, so the “self-healing” is hampered in environments of low oxygen or high salinity like seawater.

Stainless’ distinctive look is responsible for such dramatic landmarks as the Gateway Arch in St. Louis, Cloud Gate in Chicago and the Chrysler Building in New York. 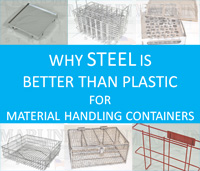