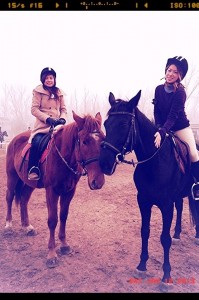 We received a welcome e-mail recently from Alexandria Liu, a bright master's student at Peking University. We met Alexandria during a trade-mission trip to Asia that we took with Governor O'Malley and a business contingent from Maryland in 2011. Alexandria recently sent a photo of her with a friend on horseback in Beijing. They seemed to be riding in a cloud, so thick was the smog. In the photo, the trees were only 200 feet behind her, as she described it, but you could barely make them out. After being out in the elements for two hours, Alexandria and her friend were sick with a sinus infection for two days, she wrote.

Recent news reports about the horrific air quality there appeared in the Los Angeles Times and in a Washington Post blog. The blog even mentioned a Twitter account @BeijingAir tied to a monitor a top the U.S. Embassy in Beijing that continually spits out air quality readings. 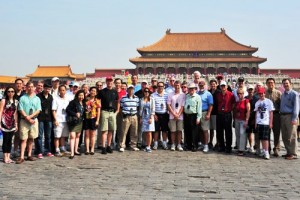 We noticed the severe conditions on our trip to China. The smog in Shanghai was stunning. The Yangtze River there is about as wide as the Inner Harbor in Baltimore, but you couldn't see across it. Amid President Obama's emphasis this week on reaffirming a commitment to combat climate change, it might sound counter-intuitive but bringing back more manufacturing to the United States would help.

An entrepreneur named Rob Honeycutt echoed similar thoughts in a recent post on an environmental blog that included interesting observations about the link between lean manufacturing, supply chain efficiencies and climate change. We have more environmental control than many of the nations overseas that have attracted so much production away from our shores due to cheap labor. Among the cost imbalances that U.S. manufacturers face with overseas competition is that of ameliorating pollution. When we chrome-plate a materials-handling basket, for example, the effluent coming out of the coatings plant has to have less nickel and chrome than the tap water coming in. American factories generate little environmental impact compared to the same facility in China. Until China addresses these issues, it is better for the world if the USA manufactures more.