Fighting Intellectual Property Theft in the Trade Battle with China 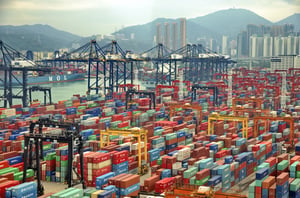 As a manufacturer that is part of organizations like the National Association of Manufacturers (NAM), Marlin Steel is dedicated to helping grow the American manufacturing industry. Marlin’s leadership believes that manufacturing is the key to growing the middle class and stimulating the American economy by creating jobs that pay a living wage—one that can support a family’s future.

And, as noted in the NAM’s Top 20 Facts About Manufacturing page, “jobs supported by exports pay, on average, 18 percent more than other jobs.” So, while manufacturing is a great way to provide high-paying jobs, manufacturers who export are even better at helping their employees achieve the financial security and success needed to fulfill the American Dream.

The Problem of Intellectual Property Theft

One of the major challenges in American manufacturing has long been dealing with unfair trade practices employed by overseas companies that take advantage of the fact that they’re not governed by the same court systems to steal the intellectual property (IP) of American companies. In one recent CNBC article, Drew Greenblatt, Marlin’s CEO and owner, talks about IP theft and how it impacts American companies:

“We come up with innovative, creative novel ideas. We spend so much money on that. They cut and paste is and steal from us… It’s hard to measure exactly how many jobs we lost here… because people don’t call or send you an email and say, ‘By the way, I bought from your competitor…’ It’s such a mess how they just steal from us on so many different fronts.”

Intellectual property is the lifeblood of many American companies—whether it’s a unique process or a product. This is why so many companies invest vast sums of money into developing their own unique IP—money that the company has to recoup. However, when a foreign competitor simply copies an innovator’s design and starts selling cheap knockoffs of it, they don’t have to spend nearly as much on research and development.

Instead, the intellectual property thief can cut the costs of R&D from their product (and even cut corners on quality and safety that U.S.-based businesses can’t) to undercut the original IP holder’s products and flood the market. This strangles American businesses by stopping them from being able to sell their products in the knockoff-flooded market(s). Not being able to protect their IPs and losing sales to IP thieves makes it harder to justify investing in creating new IP, which harms the economy overall.

Why would a loss of investment in IP by manufacturers be bad for the economy? Well, as pointed out on the aforementioned NAM Top 20 Facts About Manufacturing page, “Manufacturers in the United States perform more than three-quarters of all private-sector research and development (R&D) in the nation, driving more innovation than any other sector.” Additionally, “For every $1.00 spent in manufacturing, another $1.89 is added to the economy.”

So, how much would the American economy stand to lose by the cessation of three-quarters of the nation’s IP R&D spending? Well, according to information cited by the American Institute of Physics, “U.S. R&D funding reached an all-time high of $499 billion in 2015.” Three-quarters of that would be $374.25 billion. Multiply that by $1.89, and you get $707,332,500,000 of money lost to the economy. That’s an enormous loss—one that the nation can ill afford.

Reducing the Impact of IP Theft

In a perfect world, IP theft wouldn’t happen—or, if it did, the company being stolen from could just send a cease and desist to the other company and be secure in the knowledge that it would be honored. However, that is not always the case when dealing with foreign companies. Many companies simply ignore the cease and desist because they know they’re outside the jurisdiction of the court system that issued it—and good luck getting Chinese courts to levy a decision against a Chinese company that’s subsidized by the Chinese government.

This is part of the reason why Marlin CEO Drew Greenblatt supports recent actions by the current administration. As noted in the CNBC article, “Greenblatt lobbied the administration to take action and is glad they are doing something.” By talking about imposing tariffs on imported goods, especially from countries that have a high rate of IP theft, it’s possible to at least stop the thieves from flooding American markets with cheap knockoffs of American products. Although, there is a concern that such measures could spark a trade war between the two superpowers.

Greenblatt also noted that the best solution would be “for these two countries, America and China, to sit down” so that they could come to an agreement that creates a level playing field for companies on both sides of trade relationship. By coming to a peaceful agreement, American and China can craft a trade solution that benefits both nations, helping both economies grow.

Until then, Marlin Steel will continue to work with organizations such as NAM to try and create positive change for the manufacturing industry that grows exports and protects American innovators.