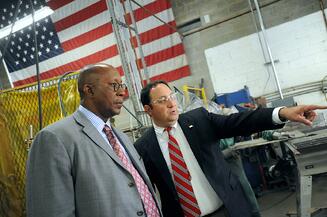 We wish him well but we're sad to see Ron Kirk go. He's leaving his post as President Obama's trade representative after having led U.S. negotiations to complete bilateral free trade agreements with South Korea, Colombia and Panama. (He also recently played a very prolific round of golf with the President, Tiger Woods and Jim Crane, owner of the Houston Astros, but for us, the trade agreements were the big driver.)

Ambassador Kirk, a former mayor of Dallas, toured Marlin Steel two years ago. We were gratified by his words of praise for our export business at an event last year at the Third Way think tank. But his most tangible impact at Marlin Steel were those trade agreements.

Not long after the Colombia trade agreement, Marlin Steel won a job to produce steel racks to hold parts on a conveyor line for a factory in Colombia. The trade agreement erased tariffs that had earlier amounted to at least a 10-percent penalty on Marlin Steel and other U.S. companies being able to compete for such work in Colombia. Minus that tariff, our bid won the job -- steel forms made by Baltimore workers with American steel. It was quite a sight, those dozens of cartons of racks lined up on our loading dock awaiting shipment to Colombia.

The issue isn't theoretical. Prior to the trade agreement, we were effectively shielded from opportunities in what is the third largest economy in Central and South America. A recent article in The Wall Street Journal told a similar story in Korea: Hyundai Motor Group saw its sales at home fall for the first time since 2008 because American-made and other foreign brands were no longer saddled with as large a tariff to sell cars there. We're hopeful for the completion of the Pacific-region trade deal being negotiated as well as a trans-Atlantic pact to strengthen U.S. economic ties with the European Union. And we were grateful for our relationship with Mr. Kirk. 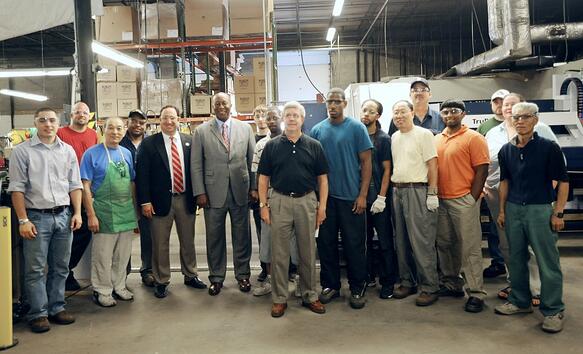