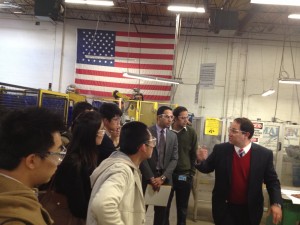 How are you able to beat competitors from China for business?

That's what about a dozen master's degree students at the Johns Hopkins University Carey Business School wanted to know on their visit to Marlin Steel yesterday. The tour was the first of several the group plans to companies in the Baltimore region as part of its "Discovery to Market" course. The students focus on examples of commercialization and innovation being put into play at organizations in fields such as manufacturing, biotech and non-profits.

"That machine you hear in the background right now is making a product that used to be made in China for a Chicago customer. From China, that shipment takes four to five weeks on a boat. Dock workers could be on strike on the West Coast. And when you open that box, you don't know [the quality] of what you're getting," explained Drew Greenblatt, president of Marlin Steel Wire Products, "That is my moat."

Referring to the Marlin Steel motto hanging on the wall above them -- "Quality Engineered Quick" -- they wanted to know if the obsessions of quality and quick ever conflicted -- did great quality interfere with being very quick? Drew explained that the goals weren't mutually exclusive, but that quality trumps all because a client would remember a defective product long after he'd remembered whether it was a day late. And if it was going to be late, Marlin lets the customer know early so he wouldn't be caught off guard, he explained.

With the course focused on innovation, he credited the fact that one-fifth of the company is made up of degreed mechanical engineers as key to that objective. That's more engineers that most of his competitors in the wireforming industry in total.