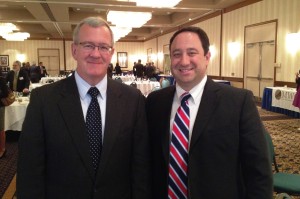 Manufacturing can often be made to feel like an anacronism in Maryland politics, especially after a decade that saw the closure of the Bethlehem Steel plant at Sparrows Point and the loss of 65,000 jobs in the sector statewide. Attention has been hard to come by.

But Friday's forum of 2014 gubernatorial candidates in front of about 200 people at the Towson Sheraton indicated that the issue is potent. The candidates said they recognize the importance of manufacturing to help heal the job market and a weakened middle class and as at least a partial answer to the continuing fraying of the state's federal jobs security blanket. "It's about next generation Maryland. It's not just about next generation manufacturing," was how Dr. Mike Galiazzo, president of RMI, put it.

Proximity to major markets and infrastructure and the state's high educational attainment should be built-in advantages as manufacturing has become more global and driven by technology and information, said Dr. Michael J. Hicks, professor of economics and director of the Center for Business and Economic Research (CBER) at Ball State University, Indiana, the keynote speaker for the event. In the mid-1990s, nearly 4 out of 5 people employed in manufacturing had not been to college, he said. Today, 1 in 3 have, with advanced technology powering plants large and small, Hicks said. Those changes are pushing productivity to historic levels.

The Great Recession swept away many manufacturers who hadn't invested in automation, lean manufacturing and other best practices to compete smarter, Hicks said. U.S. manufacturers will produce more goods, adjusted for inflation, this year than ever in history, but it will take many fewer workers than a generation ago because of the changes that have transformed factory floors, he said.

His organization isn't in the business of recommending specific regulatory changes or policies, he said. But he noted that "rust belt" states such as Indiana, Ohio and Michigan and Western Pennsylvania have taken actions to rebound after hitting bottom five years ago. Such gains that haven't materialized in Maryland. "Much of what I'm going to say doesn't need a report ... The evidence of doing well is employment growth," he said.

His center's "Manufacturing and Logistics National Report" in June gave Maryland a "D." Even the busy Port of Baltimore betrayed a structure weakness, he said: Much of what is shipped from there isn't made in Maryland, it's just passing through.

Democrat Lt. Gov. Anthony Brown informed RMI that a scheduling conflict prevented him from attending. He agreed to meet with the manufacturing group in the future, Galiazzo said. Opponents were critical of the absence.

On taxation, the candidates at the forum largely agreed that Maryland's tax rates are not competitive with surrounding states. Comparing Virginia's 6-percent corporate rate and Maryland's 8.25-percent rate, Gansler said it's not hard to figure out what product is going to move faster "if one is priced at $6 and the other at $8.25."

On regulation, the candidates also struck a similar chord. The Democrat Mizeur and Republican George both said they'd witnessed examples of regulatory excess or misdirection from their own experiences running small businesses.

Most of the candidates said that the state needs to move more aggressively to allow natural gas extraction through fracking. The state is ceding a resource being tapped successfully elsewhere, they said. Mizeur sounded the most cautionary note and urged deliberation, saying that if eco-tourism gets spoiled as a result of pollution related to natural gas exploration, Western Maryland would trade one source of jobs for another.

All of the prescriptions offered by the candidates will be published on the RMI website in the coming weeks.