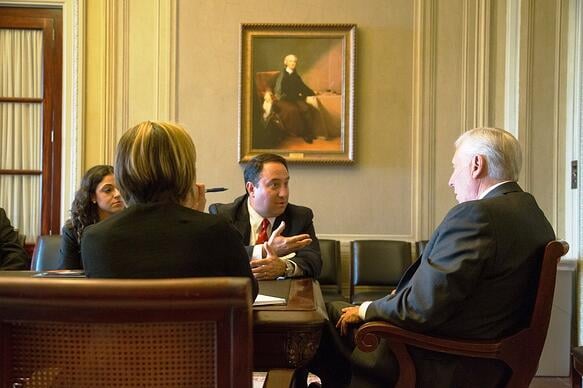 Marlin Steel President Drew Greenblatt and other members of the National Association of Manufacturers met with Congressman Steny Hoyer during a recent manufacturing "summit" organized by the national trade group in Washington, D.C.

The congressman said he was committed to helping U.S. manufacturing grow. Tax reform, tort reform and regulatory reform are all issues that need action from Congress, the group told the congressman.

American manufacturers are losing jobs to peers in other western countries because of competitors’ corporate tax advantage. The U.S. corporate tax rate of 35 percent or more is much higher than comparable trade competitors, such as roughly 15 percent in Canada and 21 percent by next year in the United Kingdom.

The congressman agreed that the playing field needs to be leveled for the U.S. to compete more effectively in a global economy. The political obstacle, he said, is that different constituencies want to preserve the tax loopholes important to them or their industry; the loopholes or credits are all defensible individually but they don't mesh because they were enacted piecemeal over time. They have created a complex system that puts the U.S. at a disadvantage in competing globally for business. Doing away with all tax breaks might be the only way to break the political logjam, he said.

Rep. Hoyer is House minority whip, the second-highest-ranking position among House Democrats. He represents Southern Maryland in the state's 5th Congressional District. Marlin Steel is based in Baltimore.