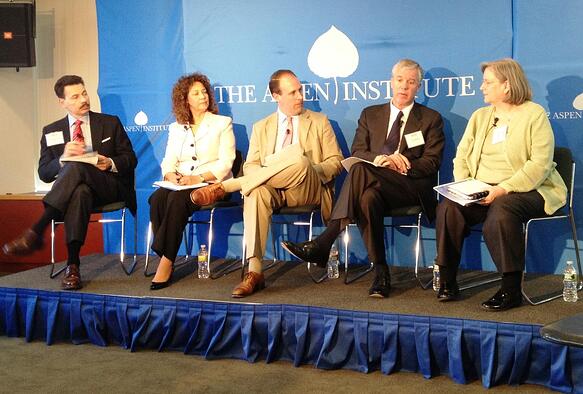 At a policy seminar on the "skills gap" in manufacturing at the Aspen Institute in Washington D.C., an executive with one of the largest higher-education providers in North America described Marlin Steel as "the poster child for CEO-level" commitment to training workers for advanced manufacturing.

The University of Phoenix parent, the Apollo Group, is trying to join with community colleges and manufacturers to create a program that small to midsized manufacturers could use to improve training. "A 'Chief Learning Officer' in a box," he called it.

The focus of the panel at the Aspen Institute was the "skills gap," so named because U.S. manufacturers are estimated to need 600,000 or more workers but say they struggle to find applicants with the math and science skills needed in a modern manufacturing facility. In one 2009 study that compared high school graduates around the world, U.S. students ranked 31st in math, 23rd in science and 17th in reading. China ranked first in all three.Also yesterday in Washington, Jennifer McNelly, president of The Manufacturing Institute, testified before the Joint Economic Committee of Congress about the "gender gap" in the industry. Women represent nearly half of the U.S. labor force, but only one-quarter of the durable goods manufacturing workforce. Greater training and mentoring opportunities were described as ways to help address that imbalance. The Institute joined with Deloitte, the University of Phoenix and the Society of Manufacturing Engineers on an initiative called STEP Ahead (women in Science, Technology, Engineering and Production) to better promote opportunities for women in manufacturing and improve diversity in the sector.