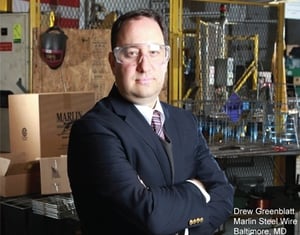 In a recent article for The Hill, Marlin Steel CEO Drew Greenblatt laid out his thoughts on the GOP Tax Bill and how it would help small- to mid-size manufacturers (like Marlin Steel) be more successful—and not just financially. As Drew says in the opening of his article:

“As a small manufacturer in Baltimore, Maryland, I measure my business’s success not just in sales made and orders shipped but also in lives changed. How many people – employees, families, community members – have I helped secure good, middle-class lives? That’s what really drives me every single day.

If the tax bill proposed by the House of Representatives becomes law, I know that my business, Marline Steel Wire Products, will be more successful by all those measures.”

The House bill, and its Senate counterpart, include provisions designed to alleviate the tax burden on American businesses and make it easier for business owners to invest in new equipment, people, and training.

Why Equipment Expensing Under the GOP Tax Plan is Crucial

In fact, Drew is so confident in the tax reform plan that he “already invested more than $1 million in new machines” to expand Marlin’s capacity to serve customers and bring on more employees.

Marlin’s investments in factory automation have allowed it to serve customers all over the globe. In fact, Marlin has exported products to countries like China, Germany, Japan, Mexico, Taiwan, and the United Kingdom—among dozens of others.

With robotic welding, wire bending, and cutting equipment, Marlin’s production team can produce custom metal forms at a high rate while meeting incredibly tight tolerances for industries that have severe performance demands. Tax incentives for expensing equipment are crucial for enabling more manufacturing companies to follow the same pattern of success as Marlin.

By making it easier to procure new equipment and expand Marlin’s production capabilities, the new tax plan would allow Marlin Steel, and other SMB manufacturers like it, to serve a larger customer base and grow faster.

The new GOP tax plan is a representation of the new administration’s dedication to moving the American economy ever-forward. This dedication to removing obstacles to growth for American businesses is already having an impact.

As Drew states in his article on The Hill:

“I’m far from the only manufacturer who is optimistic about our future and the promise of tax reform. Every Quarter, the National Association of Manufacturers fields a survey of its members. For the past three quarters, manufacturers’ confidence in their businesses’ futures has soared.

In fact, the three-quarter average is at a record high in the 20-year history of the survey. The majority of respondents – 64 percent – say they would expand their businesses when tax reform is enacted. In addition, 57 percent say they would hire more workers, and 52 percent report they would increase wages and benefits.”

This tax reform represents a real opportunity for American manufacturing to grow—and to create new jobs for American workers.

However, there are issues with the tax plan, just like there are for any new piece of legislation. No change to existing laws and regulations is likely to appeal to absolutely everyone.

As Marlin’s CEO put it, “We can get hung up on isolated concerns about the tax bill and stick with the outdated system we have now for another three decades while the rest of the world leaves us behind. Or, we can press forward for bold reform, knowing that as a country, we will be better off.”

By encouraging growth among SMB manufacturers, this tax plan has the potential to build up the American middle class with jobs that pay a living wage—not just a bare-minimum wage of flipping burgers.

Read the full text of the article on The Hill today!