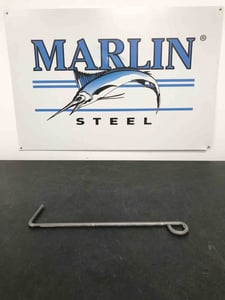 Many of the articles on the Marlin Steel blog are about the numerous custom wire baskets that the Marlin team has manufactured for various special applications. However, Marlin’s manufacturing team makes more than just baskets. On numerous occasions, Marlin has been contracted to make custom wire forms that would be used in the client’s final product.

Take, for example, when a leading home air conditioning unit manufacturer reached out to Marlin to make custom wire hooks for their A/C units. What were the hooks for, and how did Marlin make them environment-proof for use in outdoors A/C compressor/condenser units?

Custom Wire Forms to Keep Wires Out of Moving Parts

One of the most notable features of an A/C system is the large, box-like air compressor/condenser often found in the backyards of homes. These units contain components such as electrical cabling, hoses with coolant, and a large, spinning fan to move air.

The issue with this is that the spinning fan can catch excess wiring in the condensing unit which could get caught on the fan blades—causing damage to the condenser/compressor system. To counter this, the client wanted to use a set of internal brackets and hooks that could secure tubes and other wiring in place. This would keep loose wiring/tubing from getting caught in the fan.

This would also make the HVAC system easier to maintain, since the wires and tubes could have slack for the technician working on them (by removing the brackets and hooks).

As an outdoors-mounted system with an open top, HVAC system air compressors/condensers are constantly exposed to all weather conditions. This includes:

Some regions might even present unique hazards such as high salt content in the air (such as in coastal cities) or hail storms. So, the components used in these systems need to be weather-proofed as much as possible.

The metal used for these custom wire forms was grade 304 stainless steel, which would withstand exposure to water fairly easily. However, to ensure proper protection from salty air or other random corrosives, the wire forms were given a coating of hard, unplasticized polyvinyl chloride (uPVC). The uPVC layer would provide resistance to chemicals that would corrode even stainless steel—these brackets and wire hooks would outlast the fan blades in the A/C units. The incremental cost for the coating is small compared to the benefit of corrosion-resistance.

Because these parts were needed for air conditioning units and because of the need to deploy before a seasonal spike in demand for new A/C units, the client needed as many of these custom wire forms for holding air compressor/condenser wiring as possible.

Thanks to Marlin’s investments in manufacturing automation, Marlin’s manufacturing team was easily able to complete all of the hooks and other wire forms needed, on time.

Marlin’s wire-bending robot cell can take solid steel wires straight from the spool, bend them at precise angles, and cut them to the perfect length in mere seconds. You can see one of Marlin’s wire bending machines in action by watching the video on the Custom Wire Forms page.

For these robots, achieving the tight curl needed for the end of the hook and the 90˚ bend for the opposite side is easy. In fact, it’s so easy the robots achieve results that are consistent to within a few micrometers for thousands of wire-bending operations.

Contrast this with manual labor, which would take far longer to complete each bend, result in worker injuries from repetitive motion stress (carpal tunnel), and be far less consistent.

Even with the client needing thousands of custom wire forms for their A/C unit installations and repairs, Marlin’s manufacturing team was able to complete and ship out the wires in just a couple of weeks—helping the client avoid production delays that would have cost them sales.