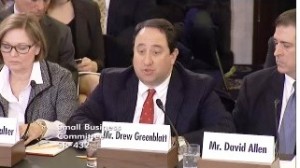 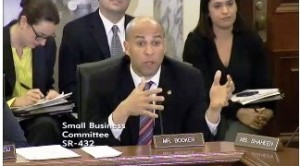 At a hearing this morning on health care before the U.S. Senate Committee on Small Business and Entrepreneurship, at which Marlin Steel President Drew Greenblatt testified, we appreciated the stream-of-consciousness comments (1:48:23 - 1:53:00) of the newest U.S. senator, Cory Booker of New Jersey, who proclaimed Mr. Greenblatt an honorary "Jersey boy.":

"Mr. Greenblatt, first of all, I appreciate your Jersey connection (as) a guy who vacations in Jersey. You have some Jersey-boy-aura to you and I want to say there's a geologist saying "You rock" and you rock not because of your Jersey connection, but because I feel a kinship to you. We both came down to Washington. You get to go home, I think, and I'm gonna stick it out here and battle it out. You deal with the pragmatism that I deal with. I had to cut 25 percent of my employees as a mayor and one of the reason I had to cut so much is because health costs were going up so much, my taxpayers couldn't afford it. I had to balance a budget every year. So do you. And the challenge that you have and that I've seen from working with global manufacturers in my city that I wanted to expand -- and you said you export products to China, right? You're competing globally, right? I like you a lot -- and when you compete globally you're competing against companies in Europe and Asia and across the globe, right?, and many of those countries have different health care systems and most of our competitor nations have much lower health care costs, right?"

When Marlin Steel's president also pointed out large tax inequities that make it difficult to compete globally, such as against Canada, Senator Booker responded, "I want to compete with Canada in every way, expect for Toronto. Their mayor is having challenges there ...."

A little levity was welcome on a serious topic that warrants a pragmatic approach: Solving the problems, lowering costs and improving quality are the objectives.

"We need to find a way to address this," Marlin Steel's president said. "I may not be a supporter of the current system, but I would definitely support changes that allow me to continue to provide high-quality health care to my employees at a reasonable price."

You can read Drew Greenblatt's testimony, on behalf of the National Association of Manufacturers, about the impact of health care cost increases on small manufacturers by clicking here.