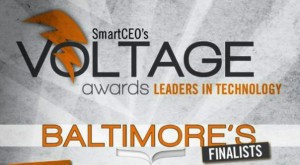 Marlin Steel is featured twice in the latest issue of Baltimore SmartCEO magazine. Marlin Steel President Drew Greenblatt is featured in a column by Rebecca Kirkman about CEO "aha moments" that propelled big ideas. Marlin Steel is also named as a finalist for a SmartCEO VOLTAGE award. Marlin is a finalist in the mid-size "Technology Implementer" category along with Protech Associates and TEDCO, the Maryland technology Development Corp. The awards are presented at an event next week.About his "aha moment," Drew wrote:

One A-ha moment stood above my other A-ha moments: It saved my company.

I bought Marlin Steel Wire Products in 1998. It was a 30-year-old company at the time, the country’s largest manufacturer of baskets for bagel bakeries. Bagels were a centuries-old product but had become a hit staple in America with bagel chains opening from Altoona to Zanesville. Annual per capita bagel consumption in the U.S. was 14 a couple years before I bought Marlin. It was double that by the time I bought the company. I applauded my foresight and timing. But fads giveth and fads taketh away. The subsequent popularity of the low-carb Atkins diet cratered bagels for a time -- and the bagel basket business. Chinese factories also began dumping bagel baskets in the U.S. market cheaper than I could even buy the raw steel.

We were hemorrhaging cash and weighing whether to close the plant, lay off our 18 employees and walk away from the investment and sweat equity.

An engineer at Boeing saw an ad for our baskets and asked if we could build one to hold airplane components through a manufacturing process. He needed just a few. It wasn’t our typical job. It seemed like a pain. When I told him I’d have to charge twice what a bagel basket cost, he didn’t blink. A-ha. Maybe we could make baskets for other things? Maybe 99 percent of our business was in the wrong market?

However, an A-ha also requires execution. Bagel baskets required little precision; baskets for aeronautics engineers require a lot. Over the years, we’ve invested millions in robotics and engineering expertise. One-fifth of our current staff of 32 people is now made up of degreed mechanical engineers. We now sell steel wire baskets and sheet metal containers to numerous industries, including automotive, pharmaceuticals and defense as well as aerospace.

The best advice I could give a fellow CEO is to surround him or herself with different people who are not always telling them how smart they are. Create a board of advisors and be transparent with them so that they give you constructive criticism and give them frequent updates of your progress and setbacks. 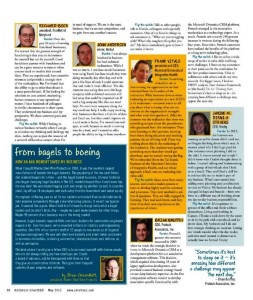 Marlin Steel in SmartCEO magazine for May 2013