The Rise of Manufacturing Jobs in America, even with Robotics 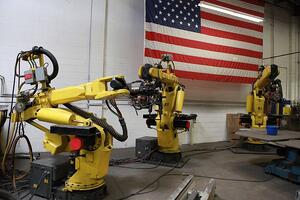 This growth has slowed somewhat in 2015, with the “diffusion index” of manufacturing jobs sitting at 44.4 in September 2015, according to a BLS.gov publication. As stated in the publication, “the diffusion index measures the dispersion of employment change in manufacturing, with a value below 50 indicating that more manufacturing industries are losing jobs than gaining.”

So, are robots to blame for the slow job growth in America’s manufacturing industry? No, in fact, manufacturing robots may actually be helping to save jobs rather than eliminating them.

How and why? Here are two key points to consider:

1: Automation Isn’t the Only Factor that Affects Employment Rates

One of the facts that many pundits like to cite is that manufacturing jobs in the U.S. have been in decline for a long time.

For example, one article featured on the Harvard Business Review states that “Manufacturing employment has been on a steady downward trend in the U.S. since 1980.” Another statistic listed in the article is that “some 22 million manufacturing jobs were lost globally between 1995 and 2002 as industrial output soared 30 percent. … It seems that devilish productivity is wreaking havoc with jobs both at home and abroad.”

This insinuates a direct, causal relationship between lost jobs and manufacturing automation. However, as any good researcher knows, correlation does not prove causation.

One article featured on brookings.edu brings up an interesting question: “how many jobs would each economy have lost if the decline in manufacturing employment was proportional to the increase in robots?”

To answer this question, the article’s author looked at the adoption of manufacturing automation by several countries and compared that to each country’s manufacturing job loss or growth.

The results did not clearly establish a link between automation adoption and job loss. As stated in the article, “by this metric the United States should have lost one-third more manufacturing jobs than it actually did and Germany should have lost 50 percent more, while the United Kingdom lost five times more than it should have.” On a side note, the U.K. was on the low end of the spectrum for number of robots used per 1 million hours of work in the study, and it was the biggest loser percentage-wise for manufacturing jobs of all the countries listed.

2: Productivity Improvements from Automation Save Businesses and Jobs

When a business is no longer competitive, when competitors are able to sell the same goods for far less, that business begins to lose its market share. It can be very difficult to overcome a complete loss of competitive edge.

Marlin Steel almost became an example of what happens when a business is no longer competitive. Back in 1998, just a few years after Marlin Steel CEO Drew Greenblatt first acquired the company and moved it to Baltimore, the bagel basket maker was devastated by the introduction of Chinese-made commodity bagel baskets that sold for less than the cost of the steel used to make them.

Almost overnight, Marlin Steel went from being the “king of the bagel baskets” to facing potential bankruptcy. If things didn’t change soon, everyone employed at the company would soon be out of a job.

Thankfully, a call from a Boeing engineer requesting high-precision parts washing baskets soon sparked a change in the company. Soon after, Marlin began investing heavily in manufacturing automation to make products that could meet demanding tolerances that would be nearly impossible to meet using purely manual manufacturing techniques.

The adoption of automated manufacturing turned the company’s fortunes around, bringing Marlin back from the brink of destruction and allowing it to enter a whole new market. Instead of shuttering its doors and laying off workers, Marlin has grown larger than its ever been before and grown its head count by more than double.

Without the efficiency benefits of automation (and a lot of training), this growth wouldn’t have been possible.

The short answer is no, there is no absolute proof that the use of manufacturing robots will always kill manufacturing industry jobs. However, automation can be a disruptive technology.

While some front-line manual labor jobs might disappear, new opportunities will be created for repairing, programming, and overseeing these new production robots. The robots can handle the hard, dirty, and dangerous work while humans are promoted to better-paying roles managing these robots.