What is Sheet Metal Stamping and How Does It Work?

When most people hear the word “stamping,” their first thought is either postage, or someone dipping a rubber stamp in ink to leave a mark on some kind of document. However, for manufacturers, stamping has a very different meaning, one that brings to mind heavy machinery that weighs thousands of pounds and can permanently reshape metal with sheer brute force.

What is sheet metal stamping? How does it work? Here are the basics of the process as well as how it can be used.

What is Sheet Metal Stamping?

The technical definition of metal stamping is that it’s a type of cold forming process that uses extreme force and/or speed to permanently alter the shape of a piece of metal. For sheet metal stamping, the work piece is sheet metal. However, metal stamping machines can be used for metal wires and other metal forms as well.

In some circles, this process is known as “pressing.”

How Do Metal Stamping Machines Work?

The basic operating theory of a metal stamping machine is very simple: you take a large tool and die, put it into a machine that can exert several tons of force very quickly, and use them to press metal objects into the shape you want.

There are several different processes that a sheet metal stamping machine can typically perform:

Because sheet metal stamping machines work on cold pieces of metal that haven’t been rendered malleable, they must rely on extreme force to get the job done—which is why these machines often have very powerful motors. For example, the Rouselle Straight Side Press stamping machine that Marlin Steel uses can exert up to 80 tons of force.

What Are the Benefits of Sheet Metal Stamping?

The advantage of this type of cold forming process is that there’s very little need for secondary operations or to wait for the work piece to cool off.

It also helps to reduce production waste by reshaping metal instead of cutting pieces away—especially when you use piercing operations. Normally, to cut a hole in sheet metal, you have to cut away a piece of that metal, but piercing with a metal stamping machine merely moves the metal out of the way to create the hole without creating excess metal scrap.

Are you curious about how you can use sheet metal stamping for your own custom metal forming needs? Contact Marlin Steel to learn more. 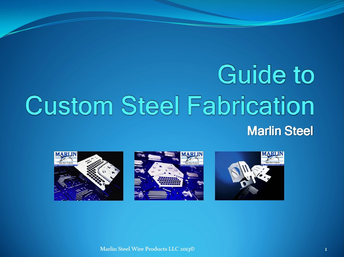