A Congressional hearing on business regulation that felt like Groundhog Day 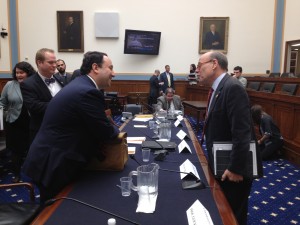 From the title of the Congressional hearing yesterday at which Marlin Steel President Drew Greenblatt testified, you knew it was not going to be your basic vanilla hearing. The House Judiciary Committee’s Subcommittee on Regulatory Reform, Commercial and Antitrust Law hearing was on the subject of “The Obama Administration’s Regulatory War on Jobs, the Economy and America’s Global Competiveness.”

Two members of the minority party on the 12-member panel took note, and took issue, with the provocative title, but the hearing covered a wider range of viewpoints than its name suggested. There was great debate about billions of dollars wasted in unnecessary regulation versus billions saved in health or environmental troubles averted by oversight. By the end of the two hours, the panel members seemed in agreement that overregulation was a burden perennially discussed but never remedied. Rep. Steve Cohen, D-Tennessee, the subcommittee's ranking member, noted it was the committee’s 17th hearing on the subject. “It feels like ‘Groundhog Day,’” said William Kovacs, who testified yesterday and on prior occasions from the U.S. Chamber of Commerce.

Committee members noted that other countries were more aggressive in confronting regulation sprawl, from Portugal to England, which has decreed that for every new regulation instituted, two others must be retired or reformed. “It’s now easier to start a business in Estonia than in America,” said Rep. Robert Goodlatte, R-Virginia, chairman of the House Judiciary Committee.

Drew Greenblatt also testified on behalf of the National Association of Manufacturers, which represents 12,000 member companies who employ 12 million people. Examples of regulatory overreach that he described seemed to mystify even the committee members who defended the benefits of regulation. One was a case in 2010, when Marlin Steel Wire received a letter from the Department of Treasury imposing a fine of $15,000 for inadvertently omitting a third signature on a 20-page form when the company created a 401(k) plan for its employees in 2006. What was a simple oversight led to several weeks of unnecessary anxiety and communications unrelated to operating a business. Though Marlin even up paying a smaller penalty for the missed signature, valuable resources were diverted from business activities for the lack of a signature on a form from four years earlier.

Another example involved Marlin’s successful export program of shipping material handling baskets to clients in 36 countries. While it takes only a few minutes to properly fill out the government-required forms when shipping products to Canada or Mexico, products shipped to non-NAFTA countries require 20 minutes or more for Marlin staff to complete. 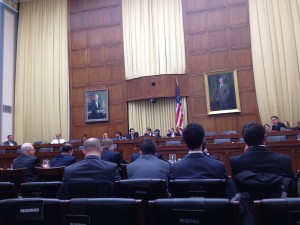 “The cumulative burden of regulation is the greatest threat for a business like mine,” Drew Greenblatt told the committee. “It isn’t just one regulation that could hurt my business it is the hundreds and thousands of accumulated requirements with hidden non-compliance penalties that hold back Marlin’s full potential.”

“There’s a balance that needs to be struck,” said Rep. Douglas Collins, R-Georgia.

“We know it’s broken, there is no question, cool heads can prevail ... we don’t have to declare war,” said Rep. Jose Garcia, D-Florida. “That Mr. Greenblatt is filling out a form should be absurd to all of us what with our computer technology. ... We understand that there is regulation and then there is excessive regulation. There are rules that have been here too long and we should be working on all of this.”