In 1967, the National Transportation and Safety Board (NTSB) was created to help investigate domestic transportation accidents, including those that occur in aviation. Because the machines that transport cargo and people are complex, understanding how and why they fail, or how and why an accident occurs allows us to learn more about the ways we may prevent those issues or errors.

So, in 2018, when an engine failure caused the first commercial airline fatality in 9 years, investigators were eager to determine the cause. Since then additional engine failures resulting in incidents have led investigators to dig into engine fan blades and metal fatigue as one of the primary causes of these incidents. So, once we’ve discovered a potential cause, it’s time we investigate how we prevent those issues from repeating.

The aerospace industry requires precision and care. While made of sturdy metals, airplane parts are still rather delicate in that any dent, scratch, or other measure of compromised integrity may cause much larger issues further down the line. For that reason, Marlin Steel prides itself on creating the tools that enable cleaning, inspection, and repair, while protecting parts from damage.


What are Blade Carts and Baskets?

In the past, airlines relied heavily on aluminum for parts, but have recently shifted to aerospace grades of steel. While steel is used only on specific components, you’ll still find plenty of steel in maintenance, repair, and overhaul (MRO) facilities, which are responsible for handling sensitive engine parts for a variety of needed inspections and services.

As part of the MRO process, engine fan blades are often removed and inspected. During that inspection and cleaning, blade carts and baskets are used to move blades around the facility, as they are far too large and heavy to be carried by hand. As one can imagine, anytime action is taken with these blades, it must be done with utmost care to ensure the integrity of the part. Blade carts and baskets assist in the transfer of engine fan blades in MRO facilities.

How Does Cleaning and Inspection Process Impact Fan Blade Performance?

Regular maintenance and cleaning of fan blades is vital to the performance and efficiency of airplane engines. As part of normal use, the blades are exposed to a remarkable amount of particles such as dirt, oil, and other debris. After time, a build up of those particulates creates a coating on the blade which impacts operation by decreasing the aerodynamic efficiency and, ultimately, engine performance.

Similarly, any surface damage to the blade itself must be addressed. Some damage can be repaired, provided it passes through inspection post-repair, and damage to the outer half of the blade is better tolerated. For cracks, a fluorescent penetrant is used to identify existing cracks as blades cannot show any of that kind of damage at all to pass inspection.

Because the aviation industry has such high safety standards, this MRO process must take care to handle all parts carefully as any damage incurred while in the facility means the part must begin the process again. As any damage to a blade must be addressed and can cost valuable time in the repair and re-inspection process damage caused in normal use is expected, but damage at an MRO facility is unacceptable.

For that reason, blade carts and baskets are vital to ensure all parts are held fast and protected as they move through each part of the cleaning and inspection process.

Because every engine manufacturer has different specifications based on the design of the engine and components themselves, a basket or cart that works for one blade may not work for another. For this reason, Marlin Steel takes the design of aerospace carts and baskets seriously with plenty of time spent in the “fact” finding portions of the design process to ensure parts will be protected through all phases of the MRO process.

Further, as blades move through the facility, damages must be prevented. In fact, the FAA requires that blades and vanes do not scrape each other. As noted above, even those surface level damages must be addressed and can cause unnecessary delays and costs. In fact, even small scratches can result in a blade being put out of commission.

For that reason, Marlin’s well-designed baskets ensure that blades and do not come into contact with each other or other obstacles via neoprene liners and other coatings that cover the basket’s floor. The liners prevent damage from metal-on-metal contact and keep blades from being damaged during movement.

Additionally, each custom aerospace steel cart basket has robust, thick side walls to prevent parts from colliding with other objects while en route, such as forklifts. This feature helps keep the aerospace parts from being damaged or scratched.

Ensuring the integrity of all aerospace parts is vital to the industry, manufacturers, airlines, and passengers alike (even if the passengers never see the process). Everything Marlin does is done with that integrity in mind. The engineers and entire team practice a culture of safety in their own facility and, as a company value, pass it forward to every industry and every part they work with.

If you’re ready to talk to the Marlin team about how they can design and manufacture blade carts or baskets to assist your team, get in touch with them today! 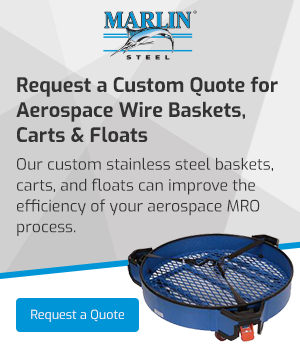