Custom Metal Basket for Use in Vacuum Impregnation Equipment 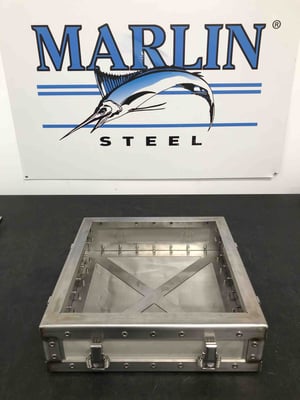 This client was drilling holes in metal cubes and needed an efficient way to clear all of the leftover metal shavings from the holes. The suction process where the autoclave is drained of air proved to be an effective and efficient method of removing these metal shavings. However, if the shavings were pulled into the equipment, the equipment could become damaged.

So, the client needed a basket that could hold the metal cubes in place during the vacuum impregnation process and filter the metal shavings so they would not pass into the equipment.

Designing a Basket to Filter Metal Shavings in Vacuum Impregnation

The major challenge here was building a basket that would allow air in and out, yet not bend during the intense pressure changes that vacuum impregnation would create. Regular wire mesh would easily let air in and out. However, the open space between wires needed to be strictly controlled, and the mesh needed to be strongly supported to prevent it from warping.

Marlin’s design team decided to use an ultra-fine wire mesh—one so closely-spaced that it would almost look like thin sheet metal to the naked eye. To support this wire mesh, two layers of sheet metal were used for the frame and thoroughly welded to the wires. The sheet metal itself was further secured with a series of thick metal bolts. These bolts ran through both layers of sheet metal and the wire mesh between them.

A thick sheet metal lid was incorporated into the design. Unlike many of the other lids Marlin uses in its custom wire baskets, this lid was not hinged. Instead, it was secured to the basket via four separate latches with spring-reinforced hooking mechanisms. These latches would hold the lid securely in place through the roughest air pressure changes. When needed, the latches could be lifted to loosen the springs and remove the lid.

For any custom manufacturing application, it is important to thoroughly test a product before committing to mass production. Normally, this is a process that could take months as physical prototypes are manufactured, tested in real-world conditions, rejected, and then sent back to the drawing board for modification. Marlin’s design team has a better way to test a custom wire basket design—one that condenses the months-long process of testing into mere hours without ever wasting a single ounce of metal.

Instead of going through the setup and materials needed to make a prototype, Marlin’s engineers use a physics simulation software to vet every custom basket design they produce. With the Finite Element Analysis (FEA) software, the engineering team can simulate years of constant use on a basket in minutes. Better still, if the basket design fails for any reason, a detailed report citing the cause of the failure is generated—which helps speed up the process for modifying the basket’s design.

Thanks to the use of FEA software, Marlin’s engineering team was able to put the basket through several design revisions in a day. Once they made an optimal basket that could withstand the client’s vacuum impregnation process, it was moved to the manufacturing team for rapid assembly.

The end result was that the client got the perfect basket for use with their vacuum impregnation equipment with very little time spent waiting for traditional prototyping and testing.

Need a custom wire basket ASAP? Get a custom basket quote from the experts at Marlin Steel!