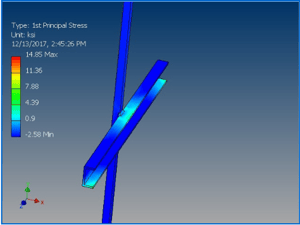 For many major industrial parts handling/processing applications, the load bearing capacity of the baskets holding the parts is a major concern. If the baskets don’t have a sufficient load capacity to hold the parts, then they’ll break apart under the weight.

However, there are many elements that can affect the ability of a wire basket to safely carry a particular load. For example, the distribution of weight, points of contact, quality of welds, ambient temperatures, and exposure to certain chemicals can all affect how well a basket is able to bear a given load.

This is why, when a customer asks Marlin to make a heavy-duty custom wire basket for parts handling or washing applications, Marlin’s design team always runs a finite element analysis (FEA) on the basket design.

What is an FEA?

In this FEA analysis process, Marlin’s engineers can program the software to simulate different distributions of weight on the basket at different temperatures and after exposure to specific chemicals.

Basically, the FEA allowed Marlin’s production team to subject a basket design to every conceivable kind of stress in a virtual environment.

Why Use FEA Software for a Stress Analysis?

Aside from the fact that the software allowed Marlin’s engineering team to test the design before ever having to set tooling for a basket (saving time, labor, and material), using FEA software allowed for much more comprehensive testing than a cursory prototype test.

In an FEA, every last welded joint can be checked to see if it would be able to bear the weight of the parts to be held. This is important because the distribution of a heavy load isn’t always consistent—sometimes parts could be loaded in a way that changes where the majority of the pressure from their weight is applied to the basket. If a welded joint or piece of wire isn’t strong enough to take the majority of the load weight, then it could easily fail despite the basket as a whole having a maximum load limit well in excess of the parts load.

Also, the virtual test allowed Marlin’s engineers to simultaneously test for more than just load distribution—it allowed for the testing of a load under different temperatures and during exposure to different chemicals. This makes for a more effective comparison of the basket’s ability to bear a load to its actual use conditions. 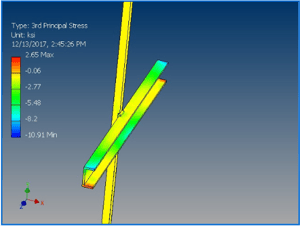 When a customer has concerns about the ability of a basket design to withstand the stresses involved in their processes, an FEA helps Marlin to ease those concerns.

In one recent custom basket order, the client had some concerns about the load bearing capacity of vertical bars that would be lifted via hooks for moving the basket. The client’s primary worry was that because this would put all of the basket’s weight on just a couple of points (where the hooks would contact the bars, and where the bars were welded to the wire frame), the chances of the basket suddenly breaking would increase.

So, Marlin’s engineering team ran a finite element analysis of the vertical bars and the attached wires to verify the ability of the design to hold up to being hoisted on a hook. In this test, the yield strength of the components and the weld was set at 50% (16,534.6 psi for the grade 304 stainless steel bar in question).

The vertical force exerted on the basket was 1,500 pounds of force from the weight of the parts to be held. According to the results of the test, the safety factor for the welded joint and metal bar was between 1.13713 ul at minimum and 15 ul at maximum. This meant that the design would be able to take anywhere between 1.137 and 15 times the level of force exerted in the test.

In short, the test showed the basket could easily take the stated load with room to spare. After completing the test, Marlin’s engineering team organized the results into a PDF document for the client to review.

This helped to put the client’s concerns at ease, allowing production of the basket to resume in a timely fashion.

Need a custom wire basket for a heavy-duty application? Contact Marlin Steel and get a custom basket quote!