Where are the Next Great Innovators Coming From?

A bicycle-powered chicken plucker. A shopping cart that also goes sideways. A motion detector that could save a highway patrolman’s life.

These were just some of the 17 projects offered by some 90 mechanical engineering students at the University of Maryland’s “Design Day.” Marlin Steel was the exclusive -- and first -- corporate sponsor for the event of the A. James Clark School of Engineering.

A projects competition in the “Capstone Design Course” has long been a fixture among mechanical engineering seniors at the school, but it was primarily an internal exercise until about six years ago when a public display was added to promote the inventions.

“Five of our design engineers are University of Maryland graduates so I’m a firm believer in the talent being developed at College Park,” said Drew Greenblatt, president of Marlin Steel Wire Products. “Design quality is what separates us from our cheaper foreign competitors.” Student displays were arrayed in and around the airy atrium lobby of the Jeong H. Kim Engineering Building on campus. 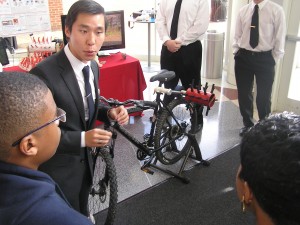 Edward Chung describes his team’s “Tour de Feather” project, which could cut the time it takes a poultry grower in an undeveloped country to pluck a chicken from 20 minutes to two.

One entry, titled “Team Prezizion: Tour de Feather” was a human-powered chicken plucker that enabled someone riding a stationary bicycle to power a rotating plucking drum. A task that would normally take two people 20 minutes could be done in 2 minutes. Its sustainable human energy source – pedal power – is readily available to farmers in undeveloped countries, explained Edward Chung, one of the team members.

The wellspring for “Team Shopping Cart Evolution” wasn’t as globally inspired – simply motivated by the students’ personal experiences wrestling an oversized cart at a big-box furniture store while shopping near campus. The group modified the wheels and added a simple hand-brake to allow a cart to easily and securely switch from forward to sideways movement.

About 90 students presented 17 projects at the Jeong H. Kim Engineering Building at the University of Maryland at College Park.

Team Terrapin Defense called its invention O-MAN for “Occupant Movement Alarm and Notifier.” A patrolman would attach a small, removal motion detector device to the driver’s door of the vehicle they’d pulled over. When the office returned to his patrol car to check a driver’s record, any attempt by the driver to open his own door or drive away would relay an immediate sensor so the officer would know immediately of any potential threat.

The school will announce the public votes for the projects in several days, although the professors’ grades are what the students value most.