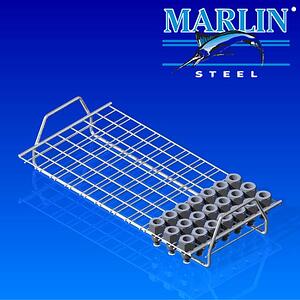 When manufacturers use automated tools to add parts to or remove parts from their ultrasonic cleaning baskets, it’s imperative that those parts can be held in a very precise layout. This is because most manufacturing robots don’t have the ability to adjust how they grab and move parts on the fly like a person can—if the part or basket is misaligned by half an inch, it’s possible that the part, basket, and/or the robot’s manipulator arm can become damaged.

Recently, another manufacturer approached Marlin Steel for a custom ultrasonic cleaning basket design to hold a series of cylindrical parts that would be loaded, processed, and moved by purely mechanical means. Marlin’s engineers knew that they would have to make every last basket to exacting parts tolerances while creating a basket design that would make keeping the parts in a consistent layout easy.

When they approached Marlin Steel, the client already had a specific type of parts washing basket in mind—something along the lines of Marlin’s 713001 basket. However, to fit the client’s specific parts, the design of the basket would have to be modified considerably.

Because the parts all had collars that were 0.7” wide, the most parts that could fit in a single square basket would be 256 (16 rows and 16 columns)—not counting the space needed for the basket’s frame or the wires used to divide the parts. It was decided that two different baskets would be needed to optimally wash the client’s two different parts types—one for the parts with 0.4”-diameter bodies and one for the part with 0.6”-diameter bodies.

The main reason is that it allowed Marlin’s engineers to optimize the spacing between wires so each slot for the cylinders was just wide enough to accommodate the body of each part. This would prevent parts from moving side to side during the wash process so they wouldn’t be out of position when the robot arm would try to grab them later.

The ultrasonic wash process itself relied on soapy water followed by a dip into isopropyl alcohol to strip parts of surface contaminants. So, to keep the baskets from rusting, they would be made out of a stainless steel alloy that could survive prolonged, repeated exposure to water, soap, and alcohol. The parts themselves were made of an Inconel® alloy, so as long as they didn’t touch one another, there was virtually no risk of the parts getting scratched during the cavitation process (the Inconel® used in the parts was harder than the stainless steel basket itself).

Each part would weigh, at most, 15 grams. At a maximum capacity of 100 parts, that would be 1,500 grams, or 3.31 pounds (rounded to the next hundredth). With such lightweight parts, the basket could use incredibly thin steel wires and still more than support the weight of these parts. While light, the dense Inconel® parts weren’t buoyant enough to float away during the ultrasonic cavitation process, so a basket lid was not considered necessary—it would have interfered with the loading/unloading process as well.

While the parts would be loaded and unloaded by machine, the baskets would be moved into the machinery by hand. So, large handles were needed to make the stainless steel baskets easy to carry. Additionally, the handles would protrude below the basket to form “feet” that would keep the rack with the dangling parts elevated from the bottom of the parts washing tank.

To ensure that the stainless steel ultrasonic cleaning baskets would work sufficiently well for the client’s process without the wires distorting, rusting, or breaking even after years of use, Marlin’s engineering team used a finite element analysis (FEA) software program. This program simulated years of use in mere minutes, cataloguing every effect of continuous exposure to the soapy water and isopropyl alcohol as well as the impacts and vibrations of an ultrasonic cavitation process.

If the wires would bend or break from the stresses involved, the reason for the failure was catalogued so the custom stainless steel basket design could be modified so that it wouldn’t fail the next cycle of testing.

Only after both variations of the custom ultrasonic cleaning basket design passed the FEA testing did Marlin’s design team hand the schematics off to the manufacturing team so the baskets could be assembled in Marlin’s Baltimore, Maryland factory. There, the manufacturing team used Marlin’s advanced factory automation tools to ensure that every last basket could meet exacting tolerances so they would all be the same. This level of precision was necessary to ensure that none of the baskets would cause issues with the client’s automation.