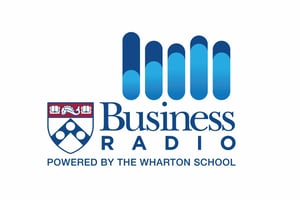 Marlin Steel’s CEO, Drew Greenblatt, can be described as an “activist business owner.” He frequently appears as an advocate for the manufacturing industry and its benefits to the American middle class in the news and at public events. Recently, Marlin’s CEO was introduced to speak on Wharton University of Pennsylvania’s business radio segment titled Mind Your Business.

On the show, Marlin’s CEO discussed the history of the company, the benefits of the new tax rules, and how manufacturing companies help grow the middle class (among other topics) with show host Loren Feldman. Here are a few highlights from the show:

Overcoming Adversity: From Bagels to Boeing

The first part of the show featured a discussion about Marlin’s transition from being the “King of the Bagel Baskets” to being a manufacturer of high-quality custom steel wire forms for manufacturers who need millimeter-precise tolerances.

When show host Loren Feldman asked Drew what he was thinking when he bought that “metal bagel basket company,” Marlin’s CEO replied: “There was a big fad going on and a lot of people were starting to eat bagels and a lot of bagel shops were opening, so I thought this was a brilliant time to enter into the bagel basket manufacturing business.” However, this acquisition did not work out as planned for Marlin’s new CEO.

After Loren asked “and how did that work out for you?” Drew told the story of how, almost immediately after acquiring Marlin, the company was driven to near-extinction because of the one-two punch of the Atkins Diet and the flooding of the bagel basket market with cheap Chinese baskets selling for less than Marlin's cost of the steel.

Eventually, a call came from a Boeing engineer who needed a precision-crafted custom wire basket. This engineer didn’t care about the cost—only whether the basket could meet precise parts tolerances. While the Boeing baskets were much more challenging and costly to make than the bagel baskets the company was known for, it proved to have a pivotal effect. Marlin had a new focus.

Reinvesting in the Company to Fuel Growth and Opportunities

In the next few segments, Loren Feldman and Drew Greenblatt discuss how Marlin grew to be the company it is today thanks to large investments in new factory automation—as well as how President Trump’s tax incentives have helped companies like Marlin be bolder with their acquisitions.

When asked about the investments Marlin made, Marlin’s CEO said that:

“We had a huge tax law change that was very favorable for domestic manufacturers—American manufacturing. It was a milestone for companies that are investing in America because all of a sudden, our investments could be instantly expensed. Which means that if we stick our neck out, and we take a chance to buy that new piece of technology, we don’t have to wait 10 or 15 years to have the investment pay us back through taxes.”

This helps make it easier for companies like Marlin to acquire new equipment to expand their manufacturing capabilities. For years, Marlin’s leadership have reinvested in the company—but instant expensing makes it easier than ever to grow.

These pro-manufacturing measures are part of the reason there’s an increase in optimism among manufacturers. In fact, during the interview, Drew Greenblatt notes that “the National Association of Manufacturers does a quarterly survey—outlook survey—and optimism has never been so high. Over 95% optimism with American manufacturers. It’s stellar.”

Creating Opportunities Through Initiative and Effort

It is a common assumption that business owners are “born rich,” but many manufacturing business owners are self-made. Jay Goltz, a frequent guest caller on Mind Your Business who owns several businesses based out of Chicago, was invited to ask Drew a question about how he got started with Marlin.

Jay’s question was about how Drew first found Marlin Steel and where he came from. Here’s an excerpt from Drew’s response:

“I graduated from—I got a business degree, an MBA, at Tulane University… I realized that working for a big company wasn’t my thing. I heard about a tiny burglar alarm company for sale in my community. I had no money—I had student debt—so I borrowed money from the seller. I tapped the Tulane alumni association and found a banker working in the Washington D.C. metro area, which is where I hail from. This banker, I gave him my business plan of why I should buy this burglar alarm security system company and he lent me the money. So I had 80% from the bank from fellow alumni whom I never met before and 20% seller financing and I bought a little burglar alarm company in Bethesda, Maryland. The company grew very nicely, and less than three years later we got an opportunity to sell it for five times what I bought it for. We took the proceeds from that transaction, and I started looking for another business… I called a list of 800 people. I started at the beginning of every month and I would call every one of them. Once I got to the 800th one, I would start calling all over again. I did this over and over again until I found Marlin Steel.”

Drew was in his early twenties when he first bought that alarm system company. This tale may be familiar to many other aspiring entrepreneurs throughout the USA, as they rely on investment capital to kick-start their businesses and grow jobs.

Giving People a Real Shot at the American Dream

One of the most important things that manufacturing businesses do is create new opportunities for hardworking people who just need an opportunity to work a job that will help them support a family.

When Loren Feldman asked about how Marlin has helped people improve their lives, Drew brought up the story of James Branch, who is one of Marlin’s best employees:

“He had a challenging upbringing and ultimately was dealing drugs on the street corners of Baltimore city. He was caught up with the law and served his time. He came out and worked at Popeye’s. He then came to manufacturing. He left Popeye’s because he was earning minimum wage… Has been with us for many years… He’s literally put his daughter through college and she graduated last May. It’s a wonderful middle-class story and we need more of this in America. James is a wonderful talent.”

James’ story was even featured in the New York Times because of how it demonstrates that giving people opportunities that matter can help turn their lives around.

When Loren asks Drew about the kind of positions Marlin’s leadership wants to fill and what Marlin will pay, Drew mentions that: “These are jobs that we’re willing to pay 30, 35, 40 dollars an hour for—and again, this is starting wages—so that they can contribute right away.” These are referencing positions such as machinists or maintenance fellows and welders—though Marlin has entry-level positions starting at $17 an hour that come with ongoing learning opportunities to eventually become a $30-$40 an hour machinist or welder. As Marlin’s CEO told the Mind Your Business host, “these are NOT burger-flipping jobs.”

Manufacturing jobs are an excellent opportunity for people to learn new skills, earn a living wage, and achieve the American dream (family, two cars, garage, and all). This is one of the reasons why Marlin’s leadership advocates for manufacturing by participating in organizations such as the National Association of Manufacturers (NAM).

You can check out the entire interview on the Wharton Mind Your Business website to get more information and details about Marlin’s story and the benefits of manufacturing. If you have any questions about Marlin Steel and how it makes custom steel wire baskets, please contact us.