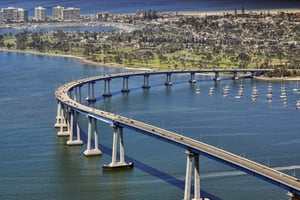 For those of you who couldn’t make it to the Cargo Logistics America Expo + Conference 2015 to see Marlin’s keynote speech in person, we got you covered! The Expo, which began today at 10:00 a.m., is a large-scale event designed to bring together freight owners with freight movers.

Manufacturers such as Marlin Steel rely on logistics providers to not only transport their goods, but the raw materials required to make them. Without fast, reliable freight movers and naval shipping companies, Marlin Steel couldn’t serve customers in 39 countries with “Quality Engineered Quick.”

So, what is Marlin’s keynote speech at the CLA Expo + Conference about? The need for increased exports in the USA, exports which will require massive logistics chains, concerted efforts from manufacturers, and support from Capitol Hill to make them a reality.

The Dangers of an Imbalance in Imports and Exports

When an economy exports a lot of goods, that creates a strong potential for economic growth, job creation, and an enhanced quality of life for citizens. Because of this, trade between countries is a wonderful opportunity to help American businesses grow stronger as businesses import and export goods.

However, when there’s an imbalance between imports and exports, businesses can suffer. This is especially true for manufacturers. If the barriers to exporting goods are too high and the importing of goods too low, it creates an uneven, and unfair, playing field for American manufacturers trying to compete on a global scale.

For example, about a decade and a half ago, Marlin Steel was faced with a severe problem. The company was dependent on the bagel basket market for most of its profits. This market was one that focused on commodity; baskets didn’t have to meet tight tolerances, the bagels just had to fit.

When government-subsidized Chinese competitors flooded the market with bagel baskets that were priced cheaper than the steel needed to make them, Marlin’s business dried up almost overnight.

Although Marlin was eventually able to refocus on making high-precision baskets for manufacturing companies, the company came dangerously close to having to shut its doors and laying off the entire workforce.

Marlin successfully adapted to the invasion of foreign products by moving to a market where precision, innovation, and speed of delivery mattered more than the base cost of the product.

The company’s brush with bankruptcy helped the company learn several key lessons about imports and exports:

Marlin has taken these lessons to heart, and works with organizations such as the National Association of Manufacturers (NAM) and the National Alliance for Jobs and Innovation (NAJI) to protect American business interests and promote the growth of the American manufacturing industry.

Why Exports Are Important

All told, USA-manufactured exports topped $1.4 trillion in 2014, an all-time high, with the average U.S. company exporting about 55% of their manufacturing output. Exports support more than 6 million manufacturing jobs across the country, and the largest job gains in manufacturing have come in sectors that sell their products overseas.

By growing exports, American manufacturers can grow jobs for Americans, ones that can pay a living wage to workers and grow the middle class.

All told, exports are an incredibly important part of the future success of not just the manufacturing industry in the USA, but of the American economy as a whole.

Even though exports are an important part of the success of American manufacturing, they’re not the only part, and not the only reason why logistics are important.

It has been calculated that for each manufacturing job leads to the creation 3-5 jobs in other industries and that every $1.00 spent in manufacturing means another $1.37 added to the economy.

Growing the manufacturing industry means more jobs, and more money, for the rest of the American economy.

For example, as manufacturers grow, they will need more infrastructure in place to ship goods to domestic markets. This means more trucks, drivers for said trucks, road crews maintaining the highways, and staff at the destination to process manufactured goods for use or sale.

The importance of manufacturing, and the logistics needed to move manufactured goods to their destination, cannot be understated.

These are just a few of the key points from Marlin’s keynote speech at the CLA Expo + Conference 2015. We look forward to more opportunities to help grow American manufacturing at similar events in the future.