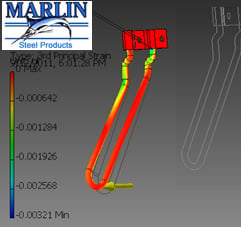 Many years ago, when Marlin Steel was known as the “king of the bagel baskets,” there really wasn’t much of an emphasis on the quality of the baskets that Marlin made. The basic metric for a successful basket design was simple: “Could it hold the bagels?”

However, things are very different now. The custom steel wire baskets that are needed by customers in advanced industries including aviation companies such as Boeing, science & research organizations such as the SLAC National Accelerator Laboratory, and the American military have to be able to meet exacting performance standards.

To fulfill the needs of clients who require high-performance baskets, Marlin needed to start building better baskets than what was standard for the company’s days as the “king of the bagel baskets.” Marlin Steel achieved increased basket quality by adopting new practices and tools, such as virtual stress analysis testing tools.

Here are a few ways:

One of the most common causes for custom baskets to fail is that it just isn’t made of the right materials.

For example, if you were to use a parts washing basket made of plain steel in a highly corrosive parts cleaning process such as vapor degreasing, the basket would likely start to corrode after just a few uses. The chemicals used in vapor degreasing are highly caustic, designed to break down stubborn leftover machine grease on parts and liquefy it enough to drain off of parts easily.

However, even some corrosion-resistant metals might not be able to stand up to repeated exposure to your degreasing process followed by whatever wash processes you use next.

This is where virtual stress testing comes in handy. With a virtual physics simulation of your process, it is possible to put the basket design through thousands of tests with a variety of material choices. This way, it’s possible to find the material that provides the best performance for your needs within your budget.

Chemicals that baskets get exposed to aren’t the only cause of basket failure. In some cases, the original design that was proposed simply isn’t strong enough on its own to support the weight of the parts or materials being loaded into it.

A physics simulation software test allows you to see that the load intended for your basket would be too much for it to survive a full load. This way, the design engineer has the opportunity to modify the design by adding extra braces or supports to the frame of the basket that can take the load without bending or breaking.

This can enhance the useful life of your custom basket design, making it more cost-effective.

3: The Ability to Detect Fatal Flaws that Would Normally Take Months to Be Revealed

There are some flaws that might exist within a basket design that would take weeks or months to manifest during regular use.

For example, say that a particular basket design was built to be just strong enough to hold the weight of your parts at room temperature. However, during exposure to high temperatures, the material the basket is made of softens slightly, losing its tensile strength. Or, repeated exposure to certain chemicals could cause slight weakening in the metal where it is welded or bolted together.

Either way, over several months, the basket would lose its structural integrity and fail, but only after a long period of time.

A virtual simulation, on the other hand, can test for years of use in mere minutes, highlighting probable causes for failure in the basket design for the engineer so that the design can be optimized.

One of the biggest benefits of using a physics simulation software to test for potential flaws in a custom steel wire basket design is that it can be done without wasting time, money, and material on making a physical prototype of a basket, shipping it over, and then running slow and cumbersome physical stress tests.

This in and of itself might not lead to a better basket design, but it does help improve time to delivery by avoiding the slow and sometimes expensive process of designing, tooling for, and building prototype after prototype until there’s finally a design that will work.

Marlin’s clients have come to rely on this kind of virtual testing to help ensure rapid delivery of viable steel wire basket designs. Learn more by checking out the case studies link found below: