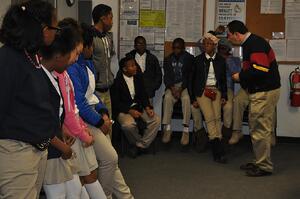 To secure the future of American manufacturing, we have to prepare the next generation of workers to take over for the Baby Boomers who are leaving the workforce. However, it’s hard to replace workers who are on the exit when public perceptions of the manufacturing industry are stuck in old stereotypes.

According to data from a National Association of Manufacturers (NAM) Manufacturing Institute survey, “Americans are proud of manufacturing, but they rely on outdated stereotypes, or think the sector is in decline.” On several key survey questions about manufacturing in the survey, there were “steep drops from record highs in 2014.”

For example, the rate at which survey respondents would say “yes” to “I would encourage my children to pursue a career in manufacturing” dropped from 37% in 2014 to 27% in 2017. This statistic shows how parents don’t have faith in the U.S. manufacturing industry’s ability to provide safe, stable, high-paying jobs to their children. Instead, they seem to think of manufacturing as it was in the early industrial revolution: A Dickensian nightmare of cramped work spaces, backbreaking labor, and poor pay.

Raising Awareness About Manufacturing as a Career

Organizations like the NAM work tirelessly to raise awareness about career opportunities in the manufacturing sector. From sponsoring school programs that promote the development of skills useful for manufacturing jobs to holding special events that showcase what manufacturing jobs really look like in the 21st century, the NAM tries to show how viable and valuable careers in manufacturing can be to the next generation of workers—and their parents.

In fact, on October 6, 2017, the NAM, in conjunction with Pfizer and many other manufacturing partners, will be hosting a series of events for Manufacturing Day.

On the first Friday of October, there will be over 1,000 events occurring simultaneously across the U.S. to promote manufacturing to students, parents, and communities. These events will showcase how the manufacturing sector can supply safe, stable, and rewarding jobs to those who have the skills and drive to succeed in a competitive environment.

The MFGday.com website highlights the benefits of these events for public perception, noting that after attending Manufacturing Day events in 2016, surveyed students were “89% more aware of manufacturing jobs in their communities, 84% more convinced that manufacturing provides careers that are interesting and rewarding, and 64% more motivated to pursue careers in manufacturing.” This increased awareness of manufacturing and its benefits is vital for encouraging tomorrow’s workers to join the manufacturing industry.

The Benefits of Manufacturing

Manufacturing helps American workers and the U.S. economy in many ways. Some key benefits of manufacturing highlighted by the NAM include:

It’s time to stop making our children settle for flipping burgers for minimum wage, and start preparing for a career that puts them on the fast track for home ownership and success.

Learn about Manufacturing Day events near you by checking out MFGday.com today, or contact Marlin Steel for more information!