Robots and Jobs: The Easily-Explained Story May Not Be the Right One

Here at the Marlin Steel factory, the production team uses manufacturing robots for a variety of different tasks. From bending steel wires, to making welds, to cutting or punching holes into sheet metal, factory robots handle a lot of the tasks that would have been left to manual labor a few years ago.

At the Marlin Steel factory, robots are a critical part of operations. Yet, despite how immensely useful manufacturing automation is for American manufacturers, there has long been a kind of stigma against using robots for common manufacturing tasks.

One reason for this social stigma against robots is the conventional “wisdom” that if a manufacturer uses more robots, then they’ll eliminate jobs. However, just because this story is easy to explain, that doesn’t necessarily make it true.

There’s a lot more to the robots and jobs equation than just “more robots = less jobs,” and Marlin Steel is proof positive that more automation doesn’t kill jobs. In Marlin’s case, automation has actually helped to protect and grow jobs.

How so? Well, there are a few ways that automation can actually protect and grow manufacturing jobs:

In an interview with Automotive News a few years back titled “Auto Industry Fuels Record N.A. Robot Sales,” Marlin CEO Drew Greenblatt stated that “A human worker operating a robot at Marlin can produce more steel products than a human working alone could.” In the interview, he used the term “hyperproductive” to describe a robot-supported worker’s output.

Using a machine to accomplish basic repetitive tasks helps give workers a massive advantage over those who try to accomplish tasks unaided.

For example, because manufacturing robots don’t get tired, they can work at making parts morning, noon, and night without stopping or getting sloppy. Each bend that a robot makes in steel wire will be just as precise as the last, and done at a speed that manual labor techniques just can’t hope to match.

With this hyperproductive labor output, Marlin is able to meet incredibly demanding custom wire forming jobs, driving more demand for Marlin’s work. As demand for Marlin’s products increases, Marlin ends up needing to hire more people to operate the robots and keep up.

2: Increasing Worker Quality of Life on the Job

Manufacturing steel goods is hard work. Hours of repetitive physical motions and heavy lifting take a toll on worker health. In the years before Marlin adopted the use of factory automation, it wasn’t uncommon to find workers with severe physical injuries, up to and including missing body parts such as fingers and eyes.

Using robots to handle the most physically demanding and repetitive tasks helps to make work safer and healthier for factory employees. The robots can handle the heavy lifting, while workers focus on finding ways to improve efficiency and consistency.

This turns manufacturing work into a job that’s more about brains than brawn. This means fewer debilitating muscle injuries for workers, and careers that can last well beyond a worker’s physical prime of youth.

Also, because each worker can produce more when using a robot, manufacturers such as Marlin are able to pay each worker more. Where Marlin once had minimum-wage employees, salary averages have jumped to more than $79,000 a year.

One of the biggest ways that robots can help protect manufacturing jobs is by making sure that the manufacturer is competitive enough to keep earning business. The exceptional productivity and consistency that robots make possible help manufacturers stay competitive in an ever-tougher global market.

For example, Marlin Steel was once threatened with bankruptcy after foreign competitors flooded the market with commodity bagel baskets back in the late nineties. Marlin couldn’t compete with the Chinese manufacturer’s price because their baskets cost less than the steel needed to make them.

To stay open, Marlin needed to find ways to become competitive in markets that relied on precision, such as the aerospace industry. Here, low-grade commodity baskets would be worse than useless. However, to meet the demands for precision in this industry, Marlin needed to change from manual labor to using the repetitive precision of automated equipment.

By making the change, Marlin was able to become competitive in a whole new market segment, helping the company keep its doors open and saving the jobs of every worker in the plant. Without automation, remaining competitive enough to consistently earn business would have been impossible, and the factory would have had to close its doors.

Conventional wisdom might claim that more robots means less jobs for humans, but that simply isn’t the truth. With every robot that Marlin adds, there’s a new opportunity for someone to get a job managing and maintaining that robot. Also, with the production capacity added by each robot, increases to the workforce become more economical.

So, while it sounds like it would be easy to make the argument that “more robots = less jobs,” this easy explanation isn’t necessarily true. The use of factory automation has helped Marlin survive, and even grow jobs, in the face of stiff competition that would have otherwise destroyed Marlin. 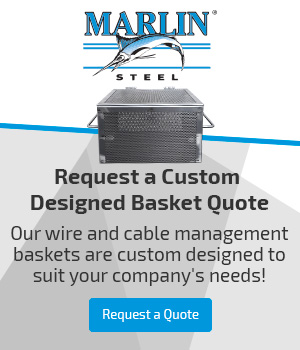