Trade Rep. Kirk on Marlin: 'We need companies like this' 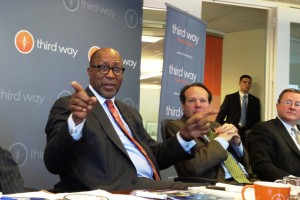 At a forum in Washington this morning, Ambassador Ron Kirk, the U.S. Trade Representative, showered a lot of praise on Marlin Steel as an example of the importance of U.S. negotiations on free trade with the Pacific region and beyond.

"We're proud of Drew. We need companies like this," said Kirk, referring to Marlin Steel, which he'd visited two years ago, and its president, Drew Greenblatt. "The opportunity to grow our trade is bigger than ever before." Twenty years after the North American Free Trade Agreement (NAFTA), negotiations to further grow trade between the U.S. and distant nations remains controversial, but Kirk said it's due to a lack of general recognition about the need to open more commerce to the world's growing middle-class to create more jobs in America. Old perceptions are also hard to dispel about the trade agreements themselves, which are structured to uphold U.S. values in labor, environmental protection and intellectual property.

"If we can't protect the innovation, everything that Drew Greenblatt has done at his little company, than he's going to be out of business if people can just rip off his stuff ... Issues of (intellectual property) protection are critical," said Kirk, a former of Dallas and President Obama's principal trade advisor, negotiator and spokesperson on trade issues. He was speaking to an audience of about 40 people at the Third Way, a moderate think tank in Washington.

"It's intrinsic to the health of our company that we grow every year and that we have more clients to sell to," Greenblatt said, echoing the importance of foreign markets. "We don't import anything and we export to 36 countries."

Ed Gerwin, a senior fellow for trade and global economic policy for the Third Way, said that the Trans-Pacific Partnership that has been under negotiation for the past several years could help U.S. manufacturers and retailers better capitalize on the $10 trillion in estimated trade value expected in East Asia by 2020. That figure is about two-thirds the value of the current U.S. economy. Gerwin referred to a large neon sign on a bridge near New Jersey's industrialized state capital that has long read, "Trenton Makes, the World Takes."