What Should You Do When Halar Coatings Fail?

In Coatings for Baskets & Racks 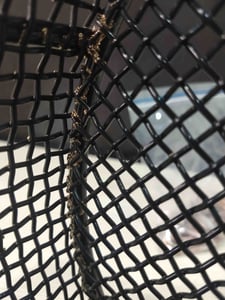 Ethylene chlorotrifluoroethylene, also known as ECTFE or Halar, is a polymer material patented by Solvay Solexis (a Belgian chemical company). It’s a well-regarded coating for manufacturing baskets because of its excellent chemical resistance and waterproofing properties. The semi-soft surface of Halar coating also makes it extremely valuable for ultrasonic parts-washing applications where the parts are delicate and have a no-scratch requirement.

However, as useful as Halar coatings can be, there are situations where the material may not hold up to prolonged use. In fact, one manufacturing company reached out to Marlin Steel not long ago about a set of Halar-coated baskets they had. The problem? The Halar coating was failing and peeling off, and the client didn’t know why.

The Halar coating provided the best protection for their baskets during their electroplating process, but the process was still damaging the basket.

What Did Marlin Do About the Halar Coating Failure?

While simply adding another layer of Halar coating to the baskets was an option, Marlin’s engineers wanted to provide the best solution to the problem, not one that would have them wasting money on re-coating every few months. So, the first thing Marlin’s engineers did was to ask about the specifics of the client’s electroplating process.

Here is a list of the processes, temperatures, and voltages the client used at each step of their electroplating process:

Why was this information critical? By studying the client’s electroplating process, Marlin’s engineers could discover the reason why the Halar coated baskets were failing. This, in turn, could be used to adjust the Halar coating process to increase the durability and useful life of the baskets.

Based on the temperatures, chemicals, and voltages involved in each step of the client’s electroplating process, Marlin’s engineers created a test to strip the basket, recoat it using a modified Halar coating process, and check the basket with a holiday and wet sponge tester.

Holiday testers are a type of non-destructive tester meant to identify pinholes and voids in the surface of a coating material that could allow air or liquids to reach the wire form being protected.

Wet sponge tests are an electrical resistance-based test method used by some holiday meters where a water-soaked sponge is passed over a coating. If the water in the sponge touches the metal basket beneath, a circuit is completed—allowing electricity to flow unimpeded and setting off an alarm on the testing device.

These tests can identify flaws or gaps in a basket’s coating that would be easily missed by the naked eye.

By testing the coated baskets with the holiday testing device, Marlin’s engineering team could identify if there was an ongoing issue with the Halar coating process and adjust as needed. For example, if the baskets continued to fail after being put through a hot-flecked powder coating process (because this produces a relatively thin coating), then the process could be replaced with a liquid dipping process that produces a much thicker coating.

What Other Options Were There?

Aside from changing the Halar coating process, Marlin’s engineers did consider changing the basket coating for another chemically-resistant polymer material. However, Halar provided the best combination of chemical resistance, sealing, and shock protection for the client’s needs.

Tougher coatings, such as Chemours’ Teflon®, would be too hard and porous. Meanwhile, many softer coatings didn’t have the right resistance to the pickling process chemicals used by the client.

Ultimately, modifying the Halar coating process was the most economical and valuable option for Marlin’s manufacturing client. The thickened Halar coating greatly extended the useful life of the baskets and kept the client’s parts safe all through the electroplating process.

Need a custom coated wire basket for a high-stress application? Reach out to the experts at Marlin Steel to get started right away.