What’s the Difference Between Standard vs. Flattened Expanded Metal? 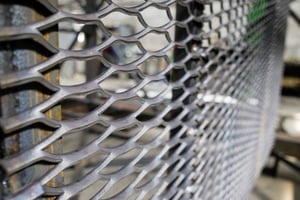 Expanded metal baskets are useful for heavyweight custom parts washing applications because they combine some of the best traits of wire baskets and sheet metal baskets. Expanded metal, unlike wire mesh, is made of a single solid sheet of material that has been compressed and stretched. Because expanded is a single piece of material, it tends to be stronger than wire mesh of the same thickness and requires less welding.

Compared to sheet metal, expanded metal offers more open space and is less costly per square inch of basket. In fact, expanded metal is even more resource-efficient than perforated sheet metal, since only very minuscule amounts of the metal are lost during the expanding process compared to the perforation process.

A Brief Explanation of Standard vs. Flattened Expanded Metal

Which Type of Expanded Metal is Better for Your Baskets?

The choice of using standard or flattened expanded metal baskets will depend on your application. The slightly rounded surface of standard expanded metal may be better for parts-washing applications where residue from process runoff may be a negative factor.

Need help choosing between standard and flattened expanded metal baskets for your manufacturing application? Reach out to the experts at Marlin for advice!