How we Custom-Made Sheet Metal Enclosures for a Green Technology

Marlin’s team of engineers and fabricators have had to adapt to many different challenges over the years. Most of the time, these challenges involve overcoming some issue of a given wash process, something that the custom metal form Marlin makes will only be exposed to for a few hors at a time. However, some clients turn to Marlin Steel for completely different needs.

For example, Blue1USA, which is described as “a fully integrated manufacturer and distributor of DEF storage and dispensing systems for use by commercial SCR fleets and retail establishments,” contracted Marlin Steel for a custom sheet metal form order.

This company needed a custom-made sheet metal enclosure for their green DEF-storage systems. Without the right enclosure, their systems would not be able to function at peak efficiency for long, or be safely moved from one location to the next.

So, Marlin’s engineering team set to work creating the perfect sheet metal enclosures to meet Blue1USA’s needs. However, before they could finalize any designs, the design team needed to complete a few basic steps first.

Step 1: Understanding the Application for the Enclosures 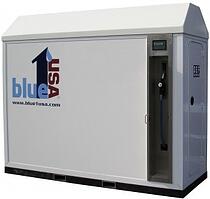 Whenever any Marlin Steel team member is designing a custom metal form for any client, that engineer first has to make sure that they know what the client’s application for that custom sheet metal form will be.

Here, the application was to use the sheet metal as an enclosure to hold the client’s DEF storage and dispensing systems. But, what is DEF and how is it used?

DEF is an acronym for Diesel Exhaust Fluid. As stated by a Cummins Filtration hand guide, “DEF is the reactant necessary for the functionality of the SCR [Selective Catalytic Reduction] system. It is a carefully blended aqueous urea solution of 32.5% high purity urea and 67.5% deionized water.” The “aqueous urea” solution mentioned here refers to a nitrogen compound that, according to the hand guide, “turns to ammonia when heated.”

This fluid, in conjunction with a catalytic converter, can massively reduce oxides of nitrogen emissions, turning the harmful NOx emissions into harmless nitrogen and water. This is why DEF is considered a “green” technology. In fact, according to Cummins, “SCR is the leading technology being used to meet 2010 emission regulations.”

Understanding the nature of the chemical to be stored, the catalytic conversion process, and the byproducts of the process (water and nitrogen) allowed Marlin’s engineers to optimize the custom sheet metal enclosure design and the material choices for it to best withstand the process.

Once the process was understood fully, the initial design was created based on the client’s specifications, modified slightly to accommodate the necessities of the SCR process.

For example, the boxes needed to fit the client’s insulated fiberglass housing that surrounded the actual cleaning system. These housings also had to be durable to withstand numerous uses each day at fleet fueling stations and at commercial truck stops.

One feature of this particular design that was different from the norm for Marlin was that the containers had to be built using rivets rather than welds to hold the components in place. On top of that, the parts had to meet tight tolerances of 1/16 of an inch so that the rivet holes would match up from one part to the next.

Rather than rush headlong into expensive tooling and prototyping costs, Marlin Steel put the design through its paces before ever committing metal to the production process.

How did Marlin Steel manage this? By using sophisticated physics modeling software such as Autodesk to test the design of the metal enclosure against the kinds of conditions it would be exposed to on a regular basis.

This provided the manufacturing team a couple of key advantages:

Thanks to the speed and thoroughness of virtual testing, the design for the custom housing could be finalized quickly and mass production of the enclosures could take place right away. Within a few short weeks, Marlin had completely filled the client’s order for 75 custom-made sheet metal enclosures.

Learn more about Custom Steel Fabrication at the link below: