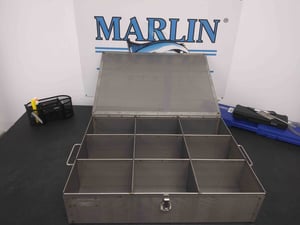 Many of the most critical parts in an aerospace industry product are incredibly small. These tiny components have to be able to meet incredibly tight parts tolerances to ensure that the final product is safe and functional enough to be used in an aircraft flying thousands of feet in the air.

To help meet these tight parts tolerances, aerospace industry manufacturers frequently use ultrasonic parts cleaning processes on their smaller components. These cleaning processes help to eliminate surface contaminants so they don’t become the tiny flaws that lead to part failure.

However, to get optimal results from their parts washing processes, aerospace manufacturers need containers to protect their components. This is where aerospace grade stainless steel baskets come in handy.

Recently, Marlin Steel was tasked with creating the ideal stainless steel aerospace basket for a client that needed to wash small parts on an assembly line that runs nonstop every single day of the year, 24 hours a day.

The major challenge in this particular parts washing application was that these stainless steel aerospace baskets would be used constantly without being given much time to dry off between parts washing processes. As soon as one batch of parts would be pulled out of the basket, the basket would go back into circulation for the next set—and there were no “days off” at this factory.

To accommodate this heavy use schedule, the design of the aerospace stainless steel baskets would need to be perfect. These baskets would have to be tougher than normal for the parts washing application in question to ensure that they would last for years of constant use.

So, for this aerospace grade stainless steel basket, Marlin’s engineers decided to use a thicker perforated sheet metal mesh rather than a woven wire mesh. Using sheet metal with perforations helped to increase the overall strength and stability of the basket—which would extend the basket’s useful life without having to perform numerous extra weld operations.

Additionally, a set of perforated sheet metal dividers were installed into the basket to keep individual parts separated during the washing process. This helped to prevent part-to-part contact that might cause surface scratches or dents that would ruin the part’s functionality.

To help keep parts secure in the basket, a hinged lid was added that used a latch to keep it shut tight during parts washing processes, but would be easy enough for a person to open.

A second basket with a shallower bed with no dividers was made to accommodate some of the client’s larger parts that would not fit in the divided basket. Both baskets featured small stainless steel wire handles on the side to make them easier to carry and move by hand.

Testing the Design for Years of Constant Use

In the initial design, it was decided that grade 304 stainless steel would be sufficient for the aerospace basket. However, rather than take that assumption and run with it, Marlin’s engineers decided to test the basket first. To do this, Marlin’s engineers used a finite element analysis (FEA) software that could simulate the effects of years of constant use in minutes.

Using the FEA software and information provided by the client about their parts washing process, Marlin’s engineers created a virtual physics simulation that could measure the effects of chemical exposure and physical stresses on the basket. If the basket couldn’t survive years of constant use without rusting up, bending, or breaking, then the design would be reworked and the new version of the basket put through the same test—this would be done over and over again until the basket could pass Marlin’s strict quality and durability standards with flying colors.

In the end, the FEA analysis showed that grade 304 stainless steel would be more than enough to survive the client’s parts washing process, even with constant use.

Do you need a custom stainless steel basket that will last, and as soon as possible? Reach out to the experts of delivering “Quality, Engineered Quick®” at Marlin Steel!