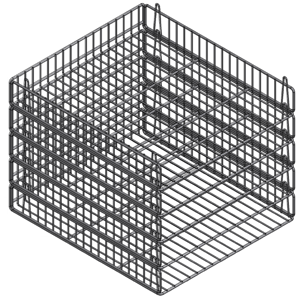 When most people think about pudding cups, they probably don’t assume that the manufacturing process is all that complicated. They think that all the manufacturer has to do is dispense pudding into the cup and seal it. However, like any food processing task, the manufacture of pudding cups is subject to numerous extra steps designed to ensure sterility and safety for the packaged food.

Recently, a major pudding cup snack manufacturer reached out to Marlin Steel for a set of custom steel wire baskets to hold their pudding cups throughout the washing, sterilization, filling, and sealing processes in their manufacturing plant.

One of the major challenges in the client’s manufacturing process was ensuring that the food processing equipment they used would be able to freely access the pudding cups the baskets would hold. Another one was making sure the baskets themselves would be easy to sterilize and prevent the collection of runoff or splattered pudding. The baskets would need to hold a large number of pudding cups at once as well.

To meet the needs for large capacity, ease of access, and simplicity of maintenance, Marlin’s design engineers decided to:

Once the design was done, Marlin’s engineering team decided to test it using finite element analysis (FEA) software. This software would take the design, divide it into countless individual pieces (or “elements”), and test the effects of different stresses on it. If the basket were to bend so much as a human hair’s width, the design would fail and the engineering team would rework it.

By repeating this process until the design passed, Marlin’s engineering team was able to ensure a perfect custom basket design for the pudding cup manufacturer’s needs.

After finalizing the design, Marlin’s manufacturing team took the .CAD files from the design team and used them to start programming a series of wire bending and welding robots to quickly assemble the components of the baskets.

Using this advanced factory automation allowed the Marlin Steel team to ensure consistently accurate wire shapes and cuts. This was especially important because the baskets needed to stack—a misplaced wire just half an inch off would keep the baskets from stacking efficiently.

Additionally, once set up, the robots could cut, bend, and weld wire for hours on end without much supervision or needing to take a break. This helped the production team rapidly assemble the baskets the client needed.

Finally, because Marlin Steel built its baskets right here in the USA (in Baltimore, Maryland to be specific), there was no need for the baskets to sit in customs or wait for a free freighter to go through a weeks-long overseas journey. This helped to ensure that the customer got their custom steel wire baskets when they needed them—preventing manufacturing delays that could keep them behind schedule.