Creating Custom Wire Baskets Without Over Engineering Them 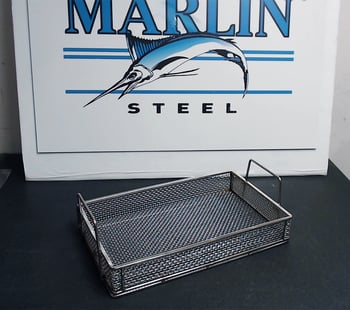 Recently, Marlin Steel was contacted by a customer who had a different sort of problem with their existing parts washing baskets—their baskets were actually over-engineered for the task at hand.

The manufacturer was expanding production for a new part and needed new part washing baskets. In the meantime, they were using an existing basket from another production line—one that was optimized for heat treatment processes. The problem was that the new parts didn’t need a heat treatment at any point in their production process.

The client needed to free up these baskets for use in the production of parts that did need heat treatment, so they came to Marlin with their existing design and a request to simplify it as much as possible.

However, the custom wire baskets that Marlin made would still have to be able to hold 200+ pounds of metallic parts ranging between 1/2” and 1-1/2” in diameter through a wash process using pH 10.2 alkaline cleaning solutions that would strip coolant, organic residue, and metallic particulates from the parts.

Building Something Simple and Resilient

Using the client’s existing baskets as a reference, Marlin’s engineers set to work seeing where they could tweak the design to simplify the design without compromising performance.

Naturally, the small size of the parts meant that the wire spacing had to be kept tight. Any holes larger than half an inch would allow the parts being washed to fall through. However, there also had to be enough open space to still allow runoff from the parts washing process to fall through the basket.

The weight of the parts and how that weight would be distributed in the basket was another challenge. Due to the variable size of the parts, the weight distribution could be very different from one basket load to the next.

So, each wire in the basket’s base needed to be strong enough to take the brunt of the load on its own. To maximize their tensile strength, the wires would be made of a thicker-gauge material.

The alkaline chemical bath wouldn’t be very harsh, but it could cause corrosion over time if the metal used in the basket wasn’t resistant enough. With enough pitting and corrosion, the wires would wear thin, becoming easier to bend and break.

To counter this, Marlin’s engineers recommended the use of a stainless steel alloy, such as grade 304 or 316. The high chromium and nickel content of these stainless steels would help prevent pitting from continuous alkaline exposure.

Even though the custom wire baskets were based on an existing design, Marlin’s engineers worked hard to modify the design to make it simpler and safer without sacrificing durability for the customer’s application. The design was put through a finite element analysis (FEA) over and over again to test different variations of design elements like the material choice (304 SS vs 316 SS), as well as the shape and thickness of the wires.

Each iteration of the design would be tested, modified, and tested again until the ideal custom wire basket design was produced—one that would meet the customer’s needs without being over engineered for the task.

However, where physical prototype tests would have taken weeks or months to complete, the use of FEA software allowed Marlin’s team to optimize the basket design in mere hours—without wasting money on tooling and materials for a prototype basket.

The end result was a custom wire basket that wasn’t too much or too little for the manufacturer’s needs—it was just right.

Get the perfect manufacturing basket for your needs by reaching out to Marlin Steel today!