How is Expanded Metal Mesh Measured and Used? 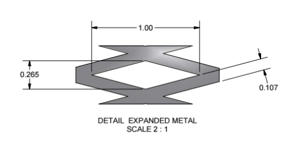 Expanded metal mesh is an excellent option for custom wire baskets that need more tensile strength than wires can provide, and more open space than what sheet metal offers without wasting metal. However, there may be some confusion about how expanded metal mesh is measured.

What is Expanded Metal Mesh?

Stainless steel expanded metal mesh is made of a single solid sheet of material that has been compressed and stretched. The expanded metal grating is useful for heavyweight custom parts washing applications, as well as providing open space for air flow and drainage.

How is Expanded Metal Made?

Flattened expanded metal is put through a cold rolling steel to flatten the mesh. This makes the expanded metal grating thinner, flatter, and wider/longer. This type of expanded metal may have dimensions slightly different from any original estimates since it can be difficult to predict how much expansion will occur during the flattening process.

When measuring expanded stainless steel metal mesh, it’s important to consider the overall size of the metal plate after it is expanded, its long and short way of opening, and its strand thickness and width. This is because each of these factors will affect the basket’s performance.

For example, larger LWOs and SWOs mean that the holes in the mesh are larger, which improves air flow for the expanded stainless steel mesh basket. On the other hand, thicker and wider strands tend to be stronger than thinner strands.

Comparing LWO and SWO against LWD and SWD helps to confirm the width of metal strands and overall open space of the mesh. For example, if the SWD and LWD of the mesh is 0.5” and 1”, and the SWO and LWO is 0.4” and 0.8”, then the width of the bond should be approximately 0.2” x 0.4”. This would provide a strand width of 0.1”. This would also create an open space of roughly 0.5 inches squared for each opening in the mesh.

The choice to determine which expanded metal grating to use will depend on your application. Since standard expanded metal has a slightly rounded surface, it may be more useful for part-washing applications where there needs to be no residue from runoff.

In comparison, flattened stainless steel expanded metal has a flatter surface that may be better for materials-handling applications to help distribute weight or prevent parts from sticking to the expanded metal grating. When weight is an issue, flattened expanded metal is lighter and slightly thinner.

It is important to note that if you’re working with flattened expanded metal, the LWO, SWO, LWD, and SWD measurements may vary somewhat depending on the direction that the metal was flattened. This introduces an element of variability that makes it harder to precisely control open space in the expanded metal basket. Flattening also makes the metal mesh thinner.

Standard stainless steel expanded metal mesh, on the other hand, has more consistent open space between strands—which is based on the machine that is expanding the sheet metal.

Want to know more about expanded stainless steel mesh baskets? Reach out to the Marlin Steel team to learn more about the benefits of expanded metal mesh.