How Tim Geithner helped us add a robot and 3 employees

When we heard the news that President Obama is expected today to name his replacement for U.S. Treasury Secretary Timothy F. Geithner, we recalled the day last spring when Mr. Geithner visited our factory in Baltimore. He was pleased that we were growing in a bad economy and exporting to 36 nations in contrast to the grim picture of American manufacturing losing out to cut-rate competitors overseas. But he got particularly enthused when Dr. Marshal "Mickey" Greenblatt, a member of the board of directors at Marlin Steel, showed him the powerful sheet-metal laser cutter that Marlin had recently purchased.

"He was fairly cool and collected, but he became very animated when I described how a change in the depreciation rule allowed us to quickly invest in the new robot equipment. The change reduced the depreciation period on the purchase from five years to one so our tax bill went down. That probably enabled us to hire three workers, I told him. He jumped up on the balls of his feet very excitedly and said, 'That was my idea. That was my idea.'”

The approval of the $500,000 cap is of particular significance to small business, compared to large corporations whose spending on equipment would run millions of dollars in a year. The accelerated depreciation enabled Marlin, and many other small businesses, to make capital investments they otherwise might have had to wait on and thus freed resources for other things like adding staff. One economist testified before Congress last winter that without the continuation of the $500,00 cap, capital investment in equipment by American business could decline by as much as $191 billion by 2015, and that each $1 billion decline in investment equated to a loss of 23,300 jobs. 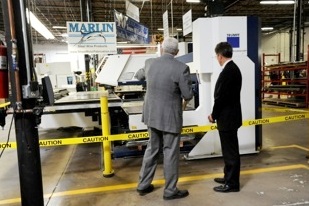 By showing him the robot investment as a result of the change in the law, we were able to provide a concrete example of how a good policy led to new jobs. The speedier robot investment also makes us more competitive: Certain components of the sheet metal and wire baskets that we produce -- items we once had to farm out to other suppliers and wait many weeks for -- we're now able to design ourselves, input into the robot and produce everything we need in 20 minutes to complete the job. Marlin Steel -- and American manufacturers in general -- are able to win more jobs by being faster and more responsive than overseas competition that make things cheap but not fast (and not with as much precision as our new laser cutter either.)

We helped make the Treasury secretary's day -- and our three new employees are happy, too.