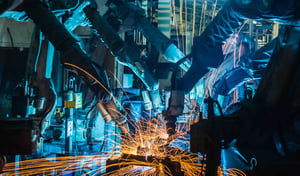 Automation can be a powerful tool for ensuring fast and consistent manufacturing. In fact, Marlin Steel’s manufacturing team uses many pieces of automated manufacturing equipment at the company’s Baltimore, Maryland-based factory location.

However, even factory automation has its limitations. This is a fact that one of Marlin’s clients had to contend with when they submitted a design request for a series of precisely-engineered stainless steel trays for use with their automotive parts manufacturing process.

What was the client’s issue, and how did Marlin meet the challenge with its own precision-engineered stainless steel trays?

The Need for Consistency in Automated Parts Manufacturing

The client’s manufacturing process was a high-speed one where automated machines would rapidly manipulate the parts being held in the tray. However, the one weakness of these high-speed machines was that they could not adapt to slight changes in the layout of parts. If a part’s placement in the tray was off by as little as 0.003” in any direction, the manufacturing equipment would fail to grab the part—hitting it or the tray at high speed and possibly causing damage to the part, the tray, and to the assembly robot itself.

Because of this extreme sensitivity to part misplacement, the client needed a stainless steel tray that would hold each part in a precise layout. Additionally, each of these trays had to be perfectly assembled. Any flaws in the arrangement of the wires caused by imperfections in the angle of a bend or the placement of a weld would make the basket unusable.

Fortunately for the client, Marlin’s engineering and manufacturing teams were up to the task of meeting these incredibly tight parts tolerances thanks to the company’s investments in manufacturing automation and employee skills development.

The first challenge was designing a custom stainless steel tray that could meet the client’s need to hold parts in an extremely precise layout. To do this, Marlin’s engineers first needed to know:

All of this information was necessary to ensure that not only the design of the tray could hold the parts in the right layout and positions for the client’s automated manufacturing process, but that they could continue to do so after years of use.

The reason the information about chemicals, temperatures, and other stress factors was necessary was because over time, if the tray wasn’t designed to withstand these stresses, it could become warped—making it unusable for the client’s automated manufacturing equipment.

Once all of this information was collected for each of the different parts that the client would be processing, design work on the custom stainless steel trays could begin.

To ensure that the custom wire trays would not warp or bend during prolonged use, they were made from grade 304 stainless steel alloy. This alloy was more than sufficient to withstand the incidental exposure to stray chemicals and the temperatures involved in the parts manufacturing process, and would not rust from prolonged exposure to the air like a plain steel alloy would. Also, it was tough enough to survive the odd impact from a drop without getting bent out of shape.

After finishing the first draft of the design, it was subjected to a series of virtual physics simulations using Finite Element Analysis (FEA) software to verify that it could withstand the client’s manufacturing process and environment without issue. The design would then be refined and re-tested until it could pass the FEA test.

To meet the incredibly tight parts tolerances required by the client, Marlin Steel’s manufacturing team leveraged Marlin’s own investments in factory automation. Using a series of wire bending robots and MFDC welding machines, the manufacturing team at Marlin’s U.S.-based factory was able to ensure that every last wire was perfectly shaped and placed to keep every tray meeting the same parts tolerances.

This was necessary to avoid mishaps in the client’s manufacturing process.

Unlike manual laborers, Marlin’s factory automation tools are able to rapidly assemble parts without error every time—this is because they don’t get bored, distracted, or tired like people do after hours of bending or welding solid metal. Once set up properly, Marlin’s factory robots can work almost wholly independent of manual input for hours on end.

Need a custom stainless steel tray or basket for your own manufacturing process? Get a custom wire form quote by contacting the experts at Marlin Steel now!