Marlin Steel in The Washington Post for its Transformation 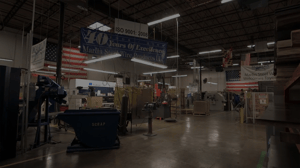 If you’re a long-time subscriber to Marlin’s blog, odds are that you’ve heard about the story “From Bagels to Boeing” at least once. Many years ago, when Marlin was first bought out by Drew Greenblatt, the company’s current owner and CEO, Marlin was known as “The King of the Bagel Baskets.” The company was an unrivaled vendor for baskets to display bagels in stores across the country during the height of a bagel craze.

However, the good times couldn’t last. Marlin Steel soon faced a crisis when the Atkins Diet hit, and consumers soon started avoiding carb-laden bagels in favor of low-carb alternatives. To add insult to injury, foreign manufacturers who were subsidized by their governments flooded the market with cheap bagel baskets that cost less than the price of the steel they were made from.

At that point, Marlin’s manufacturing methods were archaic—most steel wire bending was done by hand and the quality of the baskets was inconsistent at the best of times. Drew Greenblatt often says that conditions when he bought Marlin were “Like something out of a Dickens novel. People were missing fingers, missing eyes, and everyone was doing backbreaking work.”

So, Marlin couldn’t compete based on quality or on price. This, combined with the closure of many specialty bagel stores, led to Marlin losing most of its clients and the subsequent hemorrhaging of cash just trying to keep the doors open.

Marlin’s survival was recently the subject of an article in The Washington Post by WP reporter Thomas Heath.

The reason that Marlin Steel survived the Atkins Diet craze and the subsequent flooding of the market with cheaper bagel baskets was what the WP article referred to as “The Call.” As Thomas Heath wrote:

“An engineer at Boeing needed a customized basket with ultra-precise specifications. Greenblatt made the item and charged the engineer double what he charged the bagel clients. ‘That was my epiphany,’ Greenblatt said. ‘I was in the wrong business. I pivoted into a company that made high-quality engineered baskets.’ It took two years, but the trip from bagels to Boeing paid off. Greenblatt and Marlin survived.”

The transition from bagels to Boeing wasn’t easy. The level of precision required by Boeing was so much higher than anything Marlin’s manufacturing team had to deal with at that point. So many baskets were rejected because their dimensions were an inch or two off after manufacturing. However, the manufacturing team was able to fill the order, and do it in time to meet the deadline.

This led to another epiphany—Marlin would need to reinvent itself from the ground up to meet the needs of this new market. The same hand-bent steel wire baskets just wouldn’t hold up to the standards required by high-tech manufacturers.

So, Marlin’s CEO decided to invest in new technology and employee training to improve the company’s manufacturing capabilities. As noted in the WP article, “The piece started with an email a few weeks ago from a small Baltimore manufacturer named Drew Greenblatt. He asked me to come up to see the fruits of the $2 million he invested to expand his niche business after a story I wrote explaining capital expenditures.”

The $2 million mentioned in the article is just one of several such investments in the company that the CEO made to modernize its production methods and bring things out of the “Dickensian nightmare” that the company was at the time of acquisition. These investments were used to acquire advanced factory automation such as laser cutters, automated wire bending machines, medium frequency direct current (MFDC) welders, and massive press brakes so employees were no longer required to try to shape metal with their bare hands.

In addition to investing in automation, Marlin created a job skills matrix and started offering bonuses to employees for learning mission-critical skills. The more skills an employee was certified for, the more they would be paid. Instead of breaking their backs while risking life and limb (literally), Marlin’s employees can focus on more cerebral work designing custom wire baskets and programming machines to do the dangerous stuff for them.

The new Marlin is so safe that it achieved a no time-lost safety incident streak lasting over five years and not one, but two SHARP safety designations from OSHA—making Marlin one of the few businesses in Maryland to earn that honor.

Be sure to read the Washington Post article for the full story, or subscribe to the Marlin Blog to learn more about what Marlin Steel does!