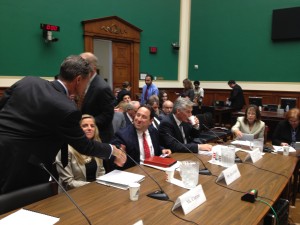 Drew Greenblatt, president of Marlin Steel Wire Products and an executive board member of the National Association of Manufacturers (NAM), testified today in Washington before members of the Energy and Commerce Committee of the U.S. House of Representatives about the competitive edge that increased domestic natural gas supplies has generated for U.S. manufacturing.

“Manufacturers across the country are expanding production and winning contracts that even a few years ago they had little chance of competing for as foreign companies were producing goods at lower costs. Now, it is U.S. manufacturers who find themselves able to produce more for less, and it is our competitors who are scrambling to keep up,” said Greenblatt, who was also speaking as a board member of the nation’s largest manufacturing trade association. NAM represents 12,000 member companies that employ 12 million people in every industrial sector and state.

“The energy boost is contributing to our own purchases of steel from Indiana and Pennsylvania; to our need to add overtime for our workers in Baltimore, and our ability to invest in automation from robot makers in Illinois and Connecticut to bend wire and cut and shape sheet metal,” Greenblatt said.

He cited projections from the research firm IHS CERA that production of unconventional oil and natural gas resources will generate $5 trillion in new capital investment and support 3.5 million jobs by 2035.