Promising Future for Metalworking Graduates in Baltimore, but .. 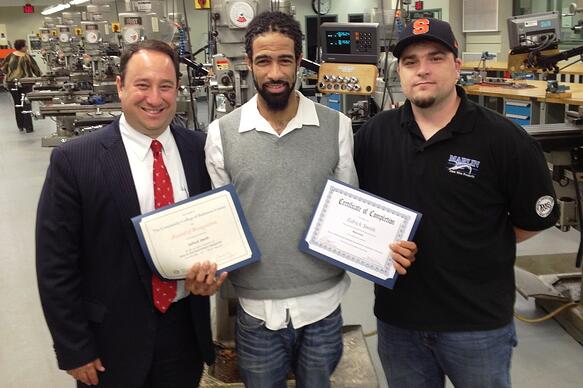 There were no caps, no gowns and the setting was a machine shop training facility, but the graduation ceremony at the Magna Baltimore Technical Training Center yesterday was as inspiring and heartfelt as any commencement this season.

One graduate spoke of being homeless and sleeping in his car while attending the tool and die machinist apprenticeship program, a secret he kept from others there. He said he now works for a major manufacturing company in town. Another graduate had enrolled at age 45 fearing that he'd fail because of his lack of algebra and trigonometry in school.

He credited the center's instructors for getting him through the course. Yet another emotionally told the organizers the program turned his life around after he was laid off as a newspaper printer a few years ago: "Because of you I can help my kids. I'm grateful. I'm on my way. You changed my life. You changed my family's life." The students who had come through the course oozed admiration for the faculty and program directors. 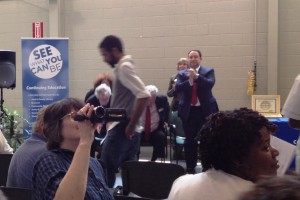 Drew Greenblatt, the president of Marlin Steel, was keynote speaker for the event. He spoke about how his company had to endure its own transition from making commodity bagel baskets, which became an unprofitable enterprise, into one that builds custom material handling containers for the automotive industry and many others. It has become one of the fastest-growing private manufacturing companies in the country in recent years.

A Marlin Steel machinist for the past year, Edrick Smith, was one of the 32 graduates honored at yesterday's ceremony. The training facility was set up in a former elementary school in 2005 as a partnership between Magna International, a global automotive parts supplier, and the Community College of Baltimore County to provide hands-on training in metalworking.

The well-equipped Magna Baltimore Technical Training Center gleams in Park Heights, but its future is uncertain

Frank Stronach, the founder of Magna, said in a 2005 news article that he got the idea for establishing the training center after seeing the impoverished neighborhood near Baltimore's Pimilico Race Track, which his entertainment-related company had purchased. Nearly one-third of the adult residents in the surrounding neighborhood have no high school diploma, about double the state and national average, according to Census data. The Magna training center covered tuition and paid an hourly wage to enrollees while they were in the program. Graduates have earned national technical training certificates, GED high-school diplomas and college credit for further study.

The program, unfortunately, is at a crossroads. Magna is ending its role after investing $8 million in its creation. CCBC officials are seeking other resources to continue it.