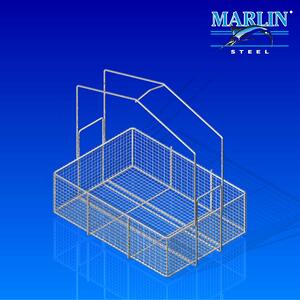 When manufacturing any kind of container for use in a process that relies on robots to grab and move parts, precision is of the utmost concern. If a part isn’t exactly where it’s supposed to be when a robotic arm goes to grab it, things tend to go wrong. The part might not get picked up, or the arm may damage the part by grabbing it in the wrong way, or the entire manufacturing process might grind to a halt depending on the setup.

So, when a client reached out to Marlin Steel about designing stainless steel trays for an automated washing procedure where parts would be picked out of the trays by robotic arms, Marlin’s engineers knew that they’d have to meet some tight tolerances.

Keeping Parts Secure in the Tray

In the Marlin questionnaire, one of the questions asked is “how are parts supposed to be held in the tray?” For many baskets where parts will be loaded or unloaded manually, it doesn’t matter if the parts are held in a “universal” style compartment where the orientation of the parts in it could be random. However, all but the most sophisticated robots have difficulty dealing with such a chaotic parts layout in a tray.

In this application, the parts had to be held in a very specific layout to ensure that they wouldn’t interfere with the robotic assembly’s ability to pick the parts out of the trays after the washing process finished. To accommodate this need, the tray would need to have specially-shaped inserts that would conform to the shape of the parts to be held.

For this design, a series of wires were used to hold parts in place. The stainless steel wires would create recessed boundaries in the tray that would keep the parts from rolling around, while also allowing any runoff from the washing process to drain away completely.

One of the challenges was making these wires closely spaced enough to keep parts from falling through without compromising the wash process or letting parts roll around. Another challenge was that the client would be processing multiple kinds of parts—each with different dimensions, so multiple stainless steel tray designs were needed.

Ensuring Durability for Repeated Use

For this particular project, the manufacturer specifically requested that stainless steel be used for the trays. Using stainless steel would greatly increase the useful life of the trays over plain steel, since the stainless would resist rusting over after exposure to water-based cleaning methods and the solvents used to break up manufacturing debris on parts when entering the client’s Dürr EcoCCore parts washing machine.

However, which alloy of stainless steel would be the best for this client’s process? Grade 304 SS is a good all-around choice for parts washing applications where the risk of exposure to chlorides and other highly-corrosive materials is minimal. 316 stainless steel, on the other hand, would provide even better protection.

Since this wash process didn’t specify the use of chlorides, grade 304 stainless steel was deemed more than sufficient for the client’s needs. Also, because the weight of held parts would max out at around 20 pounds, the wires for the tray could be kept thin and still be more than strong enough to last for years of use.

Just to be sure, Marlin’s engineers used virtual physics simulation software to run a finite element analysis (FEA) on each of the tray designs prior to making any of them. If the FEA showed that a tray would fail, the design would be reworked until it would pass the inspection.

According to the client’s specifications, they needed more than 1,600 trays with eight different design variations among them, and soon. Thankfully, Marlin’s team was more than equipped to handle a large-volume order like this one.

First, by testing each tray design with physics simulation software, Marlin’s engineers were able to condense the prototyping and testing process down from weeks to mere hours (as well as avoid costly prototyping expenses).

Second, Marlin Steel’s use of factory automation allowed for rapid, yet incredibly consistent, manufacturing for each of the client’s tray designs. Manufacturing robots can be set to work continuously without the need for human supervision once programmed. This allows the robots to keep working without having to stop and take breaks. Better yet, the consistency of automated wire bending and welding ensured that each stainless steel tray could meet millimeter-precise tolerances.

By taking advantage of the tireless precision of robotic assembly, the Marlin manufacturing team was able to complete and deliver the 1,600+ trays the client needed in just a few weeks, rather than the months it would have taken for overseas delivery. This helped the client stay on schedule with their own production—avoiding costly production delays.