Building a Custom Wire Basket with Dividers On a Schedule 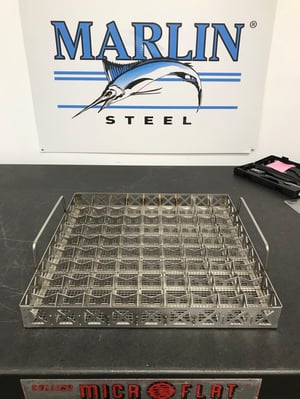 For many of the custom wire basket design quotes that Marlin Steel’s engineering team processes, time is of the essence. Many of Marlin’s customers have their own production deadlines/goals they need to meet, and they can’t afford a delay for any reason—which is why they come to a company that makes its products right here in the USA.

By using Marlin’s steel wire baskets, these companies can avoid the red tape and delays that inevitably come with having foreign-made baskets pass through customs.

Recently, a manufacturer approached Marlin Steel for a precision-engineered parts washing basket to hold their delicate parts through a custom-made parts cleaning machine. The machine had not yet been installed at their factory, but as soon as it was, they wanted to go straight into mass production.

The catch was that they didn’t have any parts washing baskets that would work with the machine—they needed a new, custom basket design and they needed it to arrive before the new machine so they could get started right away.

Every day that the new baskets were delayed would be another day where the client would have to push back their production timeline. So, Marlin’s engineering team set to work immediately to create a custom parts washing solution that could meet the client’s needs.

Designing a Custom Wire Basket for the Client’s Process

Although the client didn’t have the physical machine they would be using installed on their shop floor, they did have the specifications for the machine and how it would operate. Marlin’s engineering team sent the client a custom basket questionnaire to confirm the details of how the machine would work, what chemicals would be involved in the final process, and the operating temperatures the basket would be exposed to.

Part of the process would involve setting the basket inside of another container that was integral to the custom parts washing machine—so, the basket had to have just the right dimensions to snugly fit inside this other container.

The client’s goal was to hold at least 30 parts at a time, and each part had a strict “no scratch” requirement. To protect parts from making incidental part-to-part contact during the wash process, the basket was designed with a series of small sheet metal dividers. Each of these dividers used laser-cut stainless steel to separate each of the parts being washed. Because of the small size of each part, the divided sections could be laid out in a 9 x 9 grid, allowing up to 81 parts to be processed at a time—more than double the minimum requested by the client.

The washing process involved a series of different acid baths: hydrochloric, hydrofluoric, and nitric acid. These acid baths would be followed up with another cleaning cycle in a cleaner solution and then an ultrasonic rinse to eliminate any stray particulates. This would then culminate in a drying process with temperatures as high as 350˚F (176.6˚C).

The client specified that they would want the basket to be made of grade 304 stainless steel with a semi-soft coating, such as Tefzel® (from Chemours’ Teflon® series of coatings). While grade 304 stainless does have excellent resistance to oxidation, the variety of acids used in the client’s process would exceed its limits. The Tefzel® coating would help provide additional resistance to chemical attack. However, Tefzel’s® maximum recommended continuous use temperature is only 311˚F—39 degrees below the maximum temperature of the client’s drying process.

Whether the custom basket coating specified by the client would work would depend on how long the basket would be exposed to the high-temperature process. If the exposure were to be prolonged, the coating might fail prematurely, becoming soft and degrading with repeated exposure. However, if the high temperatures were intermittent, then the coating would be able to survive the exposure with minimal issues—Tefzel® doesn’t start to melt until it reaches 437˚F (225˚C).

Marlin’s engineers confirmed with the client how long the high-temperature processes would last and how often the basket would be exposed to such high temperatures. Once they confirmed the duration of the process, they programmed that information into a finite element analysis (FEA) software to check if the coating would show signs of degradation after repeated use.

Through this FEA software, Marlin’s engineers could simulate years of use in seconds, quickly determining whether or not the coating would fail. If the coating would fail too quickly, then Marlin’s engineers would let the client know and provide some alternative coating suggestions that balanced the need for a semi-soft contact surface and extreme corrosion resistance with the need for a high temperature resistance.

Ultimately, it was decided that the Tefzel® coating would have a sufficient useful life when used for the client’s process.

As soon as the design of the basket was finalized and approved by the client, Marlin’s production team began to set up the automated factory equipment that would handle the assembly of the baskets.

By automating the majority of the assembly work—such as bending and cutting the wire for the baskets, welding the wires to the frame, and shaping the sheet metal dividers, Marlin’s manufacturing team could ensure that every basket made for the client was able to meet their parts tolerances with consistency. This helped to ensure that every basket Marlin made would fit neatly in the client’s own container for the washing process.

On top of providing inhuman consistency in the manufacture of parts, Marlin’s factory automation was able to churn out basket components in a fraction of the time it would take a manual laborer to accomplish the same. Tasks that would take a human several minutes to finish could be accomplished in seconds with a machine. And, unlike people, the robots can work for hours on end without getting tired or suffering repetitive motion stress injuries.

The end result? The client was able to get their acid wash process baskets in a couple of weeks—with plenty of time to spare before the arrival of their custom parts washing machine.

Need a high-quality custom wire form for your manufacturing process on short notice? Contact the experts at Marlin Steel in Baltimore, Maryland to discuss your custom manufacturing basket needs!