The CFM56 Jet Engine and the Growth of the MRO Industry 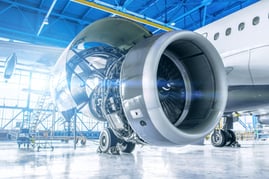 Since 2016, the CFM56 has remained the most used high bypass turbofan jet engine. At a rate of of one million hours per eight days, the CFM56 is expected to achieve a total of one billion flight hours in 2020. Altogether, the CMF56 was found to have spent a cumulative 91,000 years in the air in 2016 since its first commercial flight in 1981.

Combined with the increasing commercial flight time, engine maintenance, repairs, and overhaul (MRO) operations for the CFM56 are predicted to rise through 2025—even though most engine overhaul shops are already approaching capacity. That’s why Marlin Steel’s baskets for aerospace applications are designed to optimize efficiency and prepare your facility for an influx of CFM56 overhauls.

The History of the CFM Jet Engine

The world’s most hard working jet engine was developed in the 1970s by CFM international. As of 2016, more than 550 airlines had almost 30,000 of these engines delivered to them over the years.

The popularity of the CFM56 jet engine cannot be underestimated. CFM’s president and CEO, Jean-Paul Ebanga, was quoted as saying, “There are more than 2,400 CFM56-powered aircraft in the air at any given time.” Currently, CFM56 jet engines power tens of thousands of Boeing 737 and Airbus A320 single-aisle passenger jets.

The creation of the iconic jet engine was the brainchild of a partnership between GE Aviation and Safran Aircraft Engines of France. The two companies joined to design and build a strong, yet quiet and lightweight, jet engine for the single-aisle aircraft market. The CFM56 was first certified in 1974 and saw flight for the first time in 1977.

Since its 1977 inception, over 33,000 CFM56 engines have been delivered. Of that number, nearly 28,000 CFM56 engines are in service today. The latest upgrades of these engines can spend between 30,000 and 50,000 hours in the air before a service shop visit. That’s like traveling to the moon and back 30 times.

The jet engine has seen a number of redesigns and variants through the decades, including:

The CFM56-7 is also referred to as the CFM56-7BE, or the CFM56-7B “Evolution.” This CFM56 upgrade was designed to provide better aerodynamics, optimize engine cooling, reduce overall part count, and improve fuel burn. The CM56-7 was certified in 2010 and first delivered in 2011.

The maintenance, repair, and overhaul (MRO) industry has been expanding exponentially in recent years. Passenger travel has reached record levels and has fed the largest year-over-year increase of in-service commercial fleets since 2008.

A crucial part of the aerospace field is the MRO industry. MRO is necessary to keep aerospace engines and parts in their best shape to work effectively and safely. Most aerospace parts require flawless surface conditioning and top-class care to remain viable for use in any kind of aircraft, let alone one which will be carrying dozens of people miles above ground.

According to Aviation Magazine, the capacity for engine shops to accommodate MRO visits is globally approaching capacity. This limited capacity will be exacerbated with the overall growing commercial jet engine MRO market.

“The supply chain for engine MROs is struggling to keep up with the high demand for shop visits,” Rune Veenstra, the chief business officer for Aero Norway, was quoted as saying. “The forecast going forward shows that there will be more shop visits for the CFM56-5B and 7B for the next five years...This will create high pressure in the engine shops.”

Besides adding physical capacity to accomodate more engines, a solution to meeting these expected CFM56 engine MRO demand increases is through building efficient MRO industry operations. Reducing damage from processing and handling, to reworking workstation processes to streamline efficient MRO operations can prepare your engine overhaul shops for this.

Marlin Steel’s wire forms are built to support lean manufacturing methods for the MRO industry. Lean manufacturing focuses on maximizing productivity and time while minimizing waste. Since Marlin Steel’s steel wire baskets are manufactured with advanced factory automation tools and undergo FEA analysis, they are constructed with the utmost precision and ability to complete their purpose while reducing processing and handling defects.

These wire forms are able to meet incredibly tight parts tolerances—which is important for baskets meant to hold aircraft parts in a specific layout. In the aerospace MRO industry, where parts need to be as precise as possible, an aircraft company won’t need to be concerned that a basket’s measurements will be a few inches off, possibly damaging other machines or parts being used with the basket.

Custom aircraft parts washing baskets and circular floats reduce damage to delicate parts from processing and handling with surface condition requirements. Semi-soft coatings, such as neoprene and other liners, are added to baskets to prevent metal-on-metal contact. This keeps parts from being damaged during transportation between MRO processes.

Dividers, lids, and other design features can be added to parts washing and materials handling baskets to keep the delicate aerospace parts secure and prevent scratches and damage throughout the entire MRO. Protecting your aerospace parts reduces parts rejection and helps save the money that would be needed to fix and replace parts.

The patented circular floats made by Marlin are designed to transport aircraft parts, such as CFM56 turbine blades and vanes, between processes smoothly and quickly. The solid casters can support and move up to 600lbs of CFM systems, as well as Rolls Royce and Pratt & Whitney, securely through the workspace and protect the parts with a base of truck bed liner and neoprene wall liner.

These floats are both forklift and pallet jack friendly—and can be outfitted with the “Marlin Pusher,” an adjustable handle that allows floats and baskets to be moved seamlessly through the facility floor. Employees can now move heavy CFM56 jet engines at ease through MRO operations, optimizing time and increasing overall efficiency.

The circular floats are easy for employees to handle, so they spend less time operating the floats and baskets and more time on MRO. The “Marlin Pusher” handle is adjustable to make it accessible for both short and tall employees. The caster design allows the floats to be moved effortlessly, with a less than 30lbs push/pull force that will be easy on employee backs (and make OSHA happy). Additionally, the easy gliding casters make moving the products smooth and easy. So, better operator accessibility leads to higher MRO productivity.

To optimize facility floorspace, parts washing baskets, material handling baskets, and shaft carts can be stacked to create more space. Saving floor space can increase MRO efficiency by freeing up pathways so operations can move more swiftly. Marlin Steel designs baskets can save space by making them able to stack on top of or nest within other baskets when not in use.

Marlin Steel can provide the components needed for your MRO workstations to be prepared for CFM56 jet engine MRO. With durable, stackable shaft carts and transportable circular floats and CFM56 specific vane and blade baskets, you can streamline MRO operations with wire products purposefully designed to apply to CFM56 jet engines. Wire products built to fit the specifics of CMF56 engines, and with the integrity of USA -made quality, you can reduce rework and scrap from processing defects.