We issued a press release this morning about the recent translation of our Marlin Steel website into German to better serve our international market. We earlier added Spanish and Japanese versions accessible at marlinsteel.com

“We wanted to be able to better accommodate our German-speaking customers abroad and in the U.S.,” said Drew Greenblatt, president of Marlin Steel. “We regularly interact with industrial and automotive companies and suppliers in Germany as well as at American plants owned by German companies.” 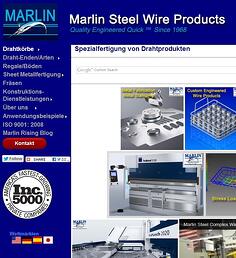 Exports make up one-quarter of Marlin’s business in building industrial material-handling containers from steel wire and sheet metal. Marlin currently exports to 36 countries. Drew Greenblatt serves on Governor O’Malley’s International Advisory Council in Maryland. He has written for Inc. magazine on the importance of export trade for the growth of U.S. manufacturing, especially by small and mid-sized companies. Marlin Steel has been visited at its Baltimore factory during the past year by journalists from some of Germany's largest media outlets, including the international broadcaster Deutsche Welle (DW), German public radio ARD and German national weekly newspaper Die Zeit.Marlin Steel was ranked as the 162nd fastest growing private manufacturer in America by Inc. magazine on its “5000” list of fast-growing U.S. companies. It was also one of three U.S. companies chosen this year for the Precision Metalforming Pioneer award by the Precision Metalforming Association and The Hitachi Foundation. It was ranked as one of the 100 fastest-growing companies based in a U.S. city by the Initiative for a Competitive Inner City. Marlin operates in an Enterprise Zone designed to bring jobs to South Baltimore. 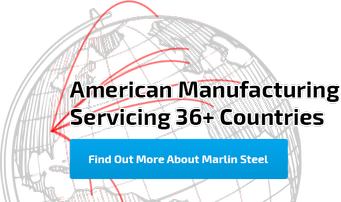