Interesting bookend articles by Jamie Smith Hopkins in the Baltimore Sun Sunday: One examined the future of industry through tours last week by the Society of Manufacturing Engineers (SME) at Marlin Steel Wire Products and other local plants. The organization's national convention in Baltimore helped the region display its potential for advanced manufacturing with its high concentration of engineers and scientists.

"These are … the guys that are on future search committees — where do you put your next plant," Drew Greenblatt, president of Marlin Steel, said of the visiting SME members.

The other piece chronicled the demise of what was once the world's busiest steel making facility at Sparrows Point through the eyes of former steelworkers and their families a year and a half after the sprawling factory in eastern Baltimore County closed.

There's certainly a present, a future and a necessity for manufacturing in the United States, but it's not going to look like the past. The Sparrows Point article is a great read, but a small graphic comparing a steelworkers' hourly wage in the U.S. (nearly $13) and Korea (less than $3) back in 1984, was particularly revealing: The seeds were set for massive change long ago. It was difficult to face then, and now. The engineers' tour last week highlighted advanced techniques such as 3D printing as sources for future growth in higher-end manufacturing. 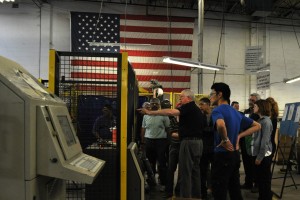 American manufacturing won’t be what it was 40 years ago when it employed one in four U.S. workers; the ratio is barely one in 10 now. But the story that America cannot or does not make anything anymore is false. The U.S. will produce about a fifth of the world's manufactured products this year, roughly as it has for 40 years. Technology has propelled greater efficiency on the assembly line. It’s been hard to celebrate massive gains in productivity because of the pain of shuttered factories. But America hasn't lost its skill as a manufacturer for the world. We just have to become more innovative about how we compete.