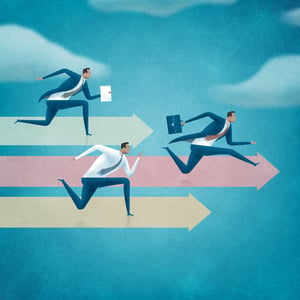 On a planet of 7 billion people, roughly 330 million live in the USA. This means that over 95% of American manufacturers’ potential customers live outside the U.S. If American manufacturing companies want to grow and be more successful so they can hire more workers, they’ll need to be able to export their products to other markets.

Now is the time for manufacturers to work with leaders in Washington D.C. to create the economic and regulatory reforms that will fuel future growth for the manufacturing sector.

Highlights from the Panel Discussion

During the panel discussion, the members of the panel fielded numerous questions about their companies, the pro-manufacturing stance of political leaders in D.C., challenges and opportunities faced by American manufacturers, and the importance of having a skilled workforce in manufacturing.

Why was optimism so high among American manufacturers? One reason may be that as a business owner, President Trump is more willing and eager to help manufacturers remove barriers to success and take a stronger stance on trade agreements with foreign powers.

In his talks with President Trump, Drew was given the opportunity to get the President’s stance on American manufacturing and share with him a small manufacturer’s insights into the regulatory burdens and trade hurdles that are holding American business owners back.

Panel discussions and events like it hosted by the NAM and similar organizations are a key part of raising awareness of the challenges faced by manufacturers and for sharing ways to overcome them.