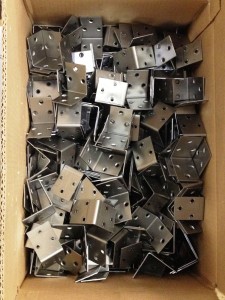 How are American manufacturers winning jobs from their Chinese competitors? A large part of the reason why is quality and speed.

Beating the Competition with Consistent Quality

In many industries, the quality of finished products plays a huge role in the product’s success. If a part doesn’t meet strict production tolerances, it can be rendered useless. However, consistently meeting parts tolerances using manual production methods can be incredibly difficult.

For example, consider a simple manufacturing job creating custom sheet metal brackets for a major Midwest supplier. These brackets are a simple design, with a small plate of metal bent at a 90-degree angle in the center, with three holes set in a triangle pattern punched into the ends of each bracket.

It’s an exceedingly simple design, but there’s a problem when you try to achieve repeated consistency across thousands of such brackets using a team of manual laborers: human workers aren’t that precise.

Hand-bending and punching holes through steel is a tough job. It’s physically-demanding work that places great strain on the worker. The result is that, over time, the worker will tire out and start to make mistakes. For example, the bend on a bracket won’t be right, or the placement of a hole will be 1/4” off. Such mistakes can render a part useless.

A worker using advanced factory automation, on the other hand, can ensure that every bend and hole-punch is performed with the near-absolute precision only possible with a computer-controlled machine. Unlike human workers, machines don’t get tired or muscle-fatigued on the job, so every operation is repeated with exacting precision.

The end result is that every last bracket made using automation is able to meet the exact same production tolerances, from the first to the 10,000th one to leave the line.

Beating the Competition with Speedy Manufacturing

As important as precision is, however, it wouldn’t matter much if the parts took too long to make and an important deadline was missed.

This is another area where automated manufacturing technology used by American manufacturers such as Marlin Steel excels.

In the aforementioned bracket manufacturing job, Marlin Steel was pitted against a Chinese company that relied on manual assembly methods to make the brackets. Each Chinese worker at the other plant was able to make about 50 brackets per hour, just slightly under a bracket a minute. This is impressive for a manual assembly method.

However, Marlin’s productivity per worker, when augmented with the use of factory automation, simply blew the Chinese competitor’s workers out of the water. Where each Chinese worker could make about 50 brackets in an hour, Marlin’s workers averaged 2,000 brackets each hour.

To keep up with Marlin’s productivity, the Chinese competitor would have to use 40 workers for every one worker Marlin used. Actually, considering how many brackets would have to be rejected and replaced, they would probably need even more workers to keep up.

Typically, overseas competitors rely on the wage difference to make up for the difference in productivity. At the time of the job, a Chinese worker earned about $2.50 an hour, and Marlin’s workers earned ten times that much. That still meant that Marlin was only using $25 of labor per 2,000 brackets made while the Chinese competitor was using $100 of labor for the same number of brackets.

This made it easy for Marlin to win the job away from the competition while paying its workers a living wage.

Thanks to automation and some hard work, American companies like Marlin are winning manufacturing opportunities away from overseas competitors, bringing jobs and growth back to the American manufacturing sector.

These perfect brackets aren’t about rebounding: they’re about reshoring and providing American workers with jobs that pay a living wage.