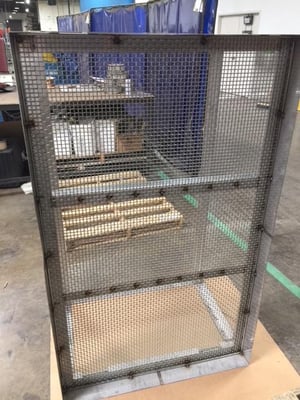 When most people think of the different branches of the military, they often picture the various fighting vehicles used by each branch of America’s armed forces. However, what they often forget about is all of the maintenance work that each branch of the military has to perform on their equipment to keep it in top shape so they are ready to deploy on a moment’s notice.

Parts cleaning is a critical process for ensuring unit readiness in all branches of the military, and a task that takes a surprising amount of time and resources. Having the right parts washing/cleaning equipment on hand can be an enormous time and money saver. However, creating an optimal parts cleaning solution for any branch of the military can be difficult.

Why? One reason is that military units, whether they’re Army, Navy, Air Force, or Marines, can be deployed to a wide range of environments—a unit that’s in a temperate seaside climate in Fort Eustis one week might be redeployed to desert climates in the Middle East or tropical climates such as those found near Diego Garcia the next week. Because each of these climates affects the equipment used to clean parts in different ways, it’s vital for the parts washing equipment to be highly resistant to a variety of stress factors—especially the custom baskets and racks used to hold parts through the maintenance/washing process.

So, when Marlin Steel was contacted about manufacturing custom stainless steel racks for use by the U.S. Air Force, Marlin’s engineers knew they had to create an all-weather solution that could be equally at home in any theater of operations that the troops may be deployed to.

Choosing a Material for the Custom Parts Washing Carts

Because the use conditions for the carts could vary so much, the carts needed to be resistant to a number of different chemical, thermal, and physical stress factors. So, plain steel was out—while certainly strong enough for most applications, the lack of chemical resistance to chlorides, acids, and other corrosives would ruin the carts (and accompanying baskets) before long. Also, many polymer materials are susceptible to wear from abrasion, have low temperature tolerances, and simply don’t have enough tensile strength to handle the stresses that the final product would be exposed to.

To help ensure a generally high resistance to most chemicals and that the frames of the carts and baskets would be tough enough to survive carrying heavy loads in the desert, near the sea, or in a jungle, Marlin’s engineers decided to use grade 304 stainless steel as the base material for each cart and parts cleaning basket.

Grade 304 stainless steel was chosen to be the primary material for the parts washing carts because it provides a good balance of durability and chemical resistance to help ensure that the final product would be suitable for use in almost any American military base at home or abroad.

The accompanying stainless steel parts washing baskets for the carts would also be made of grade 304 SS since they needed to be able to survive exposure to the same stresses as the carts.

The basic design of the parts washing cart was simple enough to complete—it just had to fit the contours of the parts washing baskets it would hold and be sturdy enough to withstand holding the maximum possible weight load for all of the baskets it could hold put together. Because the cart was made from 304 stainless, which has a very high tensile strength, it was easy to make the cart sufficiently strong with relatively thin sheets of metal.

Making sure that each cart was manufactured to a consistent quality would be more of a challenge—if it weren’t for the numerous investments that Marlin Steel has made into manufacturing automation over the years. Using a combination of automated laser cutting equipment, robotic welders, and high-speed deburring machines, Marlin’s manufacturing team was able to create a series of stainless steel carts that could meet micrometer-precise parts tolerances with incredible consistency.

Aside from ensuring consistent quality, Marlin’s automated manufacturing equipment also allowed for incredibly fast production. Once set up, these machines can keep making parts without having to stop for rest—and at a pace that human workers can’t match (an MFDC welder can complete a weld in less time than it takes a person to blink).

By taking advantage of factory automation, Marlin Steel was able to complete the order for the Air Force parts cleaning baskets and carts in just a couple of weeks—taking them from concept all the way to delivered product in a fraction of the time that an imported basket would sit in customs.